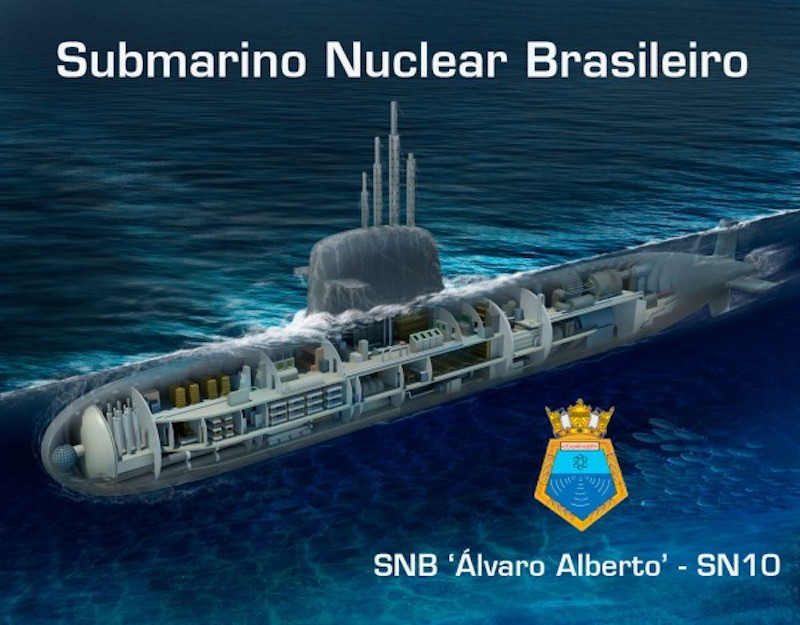 In a ceremony held on November 25, the Brazilian Navy signed an agreement to start building the hull of its first nuclear- powered submarine (SSN), the "ALVARO ALBERTO", as part of the SN-BR project. According to an official press release, the “First Partial Construction License (LPC1)” was signed by the Brazilian Navy’s Directorate-General of Nuclear and Technological Development, the Naval Authority for Nuclear Safety and Quality and Fleet Admiral Marcos Sampaio Olsen.

The event saw the participation of authorities and representatives from nuclear sector institutions, such as the International Atomic Energy Agency, the Brazilian-Argentine Agency for Accounting and Control of Nuclear Materials, and the National Nuclear Energy Commission.

The General Coordination Office for the Nuclear Propulsion Submarine Development Program (COGESN), as the applicant, submitted to ANSNQ, through the Naval Agency for Nuclear Safety and Quality (AgNSNQ), a set of documents related to the SN-BR, in compliance with the safety requirements necessary for naval nuclear licensing.

The issuance of this 1st license meets one of the prerequisites for the applicant to contract the construction site and begin construction of the submarine pressure hull.The LPC1 is the result of a strategy that aims to proceed with the licensing in well-defined stages, in order to allow an adequate level of detail in future analyses.

The strategy reflects the Navy’s commitment to achieve the highest level of safety required for a project of this magnitude, which is unprecedented, complex, and challenging.

According to H I Sutton’s World Submarines, the future SN-10 ALVARO ALBERTO SSN of the Brazilian Navy will have an (estimated) length of 100 meters, a complement of 100 sailors and feature a sail similar to those of the Scorpene-class.

The original program to develop a Brazilian nuclear- powered submarine dates back to the 1970ies. Actual work on the SN-10 started in July 2012 but has been plagued by many fiscal delays.

Planned use for this SSN is to protect Brazil’s vast maritime territory, the so called “Blue Amazon” As we reported previously, the Brazilian Navy, in its acquisition plan, expressed a need for a total of four nuclear-powered submarine.

The current contract calls for the construction of the first one. The basic design of SN-BR was approved in November 2020 in presence of French authorities.

For the record, the PROSUB program calls for the design and construction of four Riachuelo-class conventional submarines (SB-R), the design of the future nuclear-powered submarine (SN-BR) and the design of a naval base in ItaguaÏ.

French shipbuilder Naval Group is assisting Brazil in all steps of the PROSUB program (the conventional submarines, the naval base and the non nuclear aspects of the SN-BR).

Regarding the conventional submarine, the Riachuelo (S40) was launched on December 14 2018 and started its trials in September 2019. It is set to be commissioned with the Brazilian Navy in Q1 2022. The launch of the second submarine of the class, Humaitá (S41) took place 11 December 2020. The same day, the forward and aft sections of the third submarine, TONELERO (S42), were joined and welded. TONELERO (S42) and ANGOSTURA (S43) are set to be launched in 2021 and 2022 respectively.

The ALVARO ALBERTO, the first Brazilian submarine with nuclear propulsion (SN-BR), is due to be launched in 2031. The SN-BR, as well as the incorporation of the four Riachuelo-class submarines will increase the capacity of the Brazilian Navy to respond efficiently to the enormous challenge of controlling and protecting the “Blue Amazon”, which represents one third of the country’s borders.