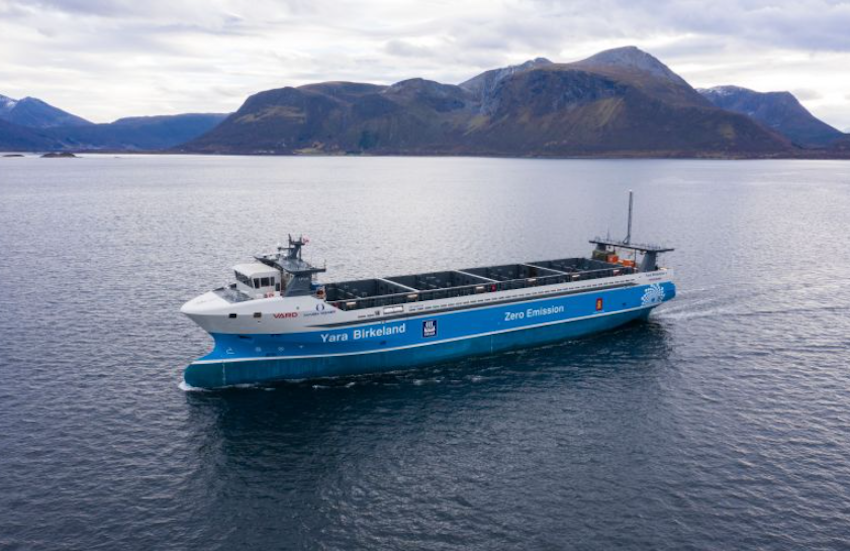 The world's first fully electric and self-steering container ship, owned by fertiliser maker Yara, is preparing to navigate Norway's southern coast and play its part in the country's plans to clean-up its industry.

The Yara Birkeland, an 80-metre-long (87 yards) so-called feeder, is set to replace lorry haulage between Yara's plant in Porsgrunn in southern Norway and its export port in Brevik, about 14 km (8.7 miles) away by road, starting next year.

It will cut 1,000 tonnes of carbon emissions per year, equivalent to 40,000 diesel-powered journeys by road, and is expected to be fully autonomous in two years.

"Now we have taken this technological leap to show it is possible, and I'm thinking there are so many routes in the world where it is possible to implement the same type of ship," he told Reuters.

Built by Vard Norway, Kongsberg provided key technology including the sensors and integration required for remote and autonomous operations.

"This isn't about replacing the sailors, it's replacing the truck drivers," Yara's Jostein Braaten, project manager for the ship, said at the ship's bridge, which will be removed when the vessel is running at full automation.

The ship will load and offload its cargo, recharge its batteries and also navigate without human involvement. Sensors will be able to quickly detect and understand objects like kayaks in the water so the ship can decide what action to take to avoid hitting anything, Braaten said. The system should be an improvement over having a manual system, he added.
"We've taken away the human element, which today is also the cause of many of the accidents we see," Braaten said.

The ship, which will do two journeys per week to start with, has capacity to ship 120 20-foot containers of fertiliser at a time.

It is powered by batteries provided by Swiss Leclanche packing 7 megawatt hours over eight battery rooms, the equivalent of 100 Tesla cars, Braaten said.