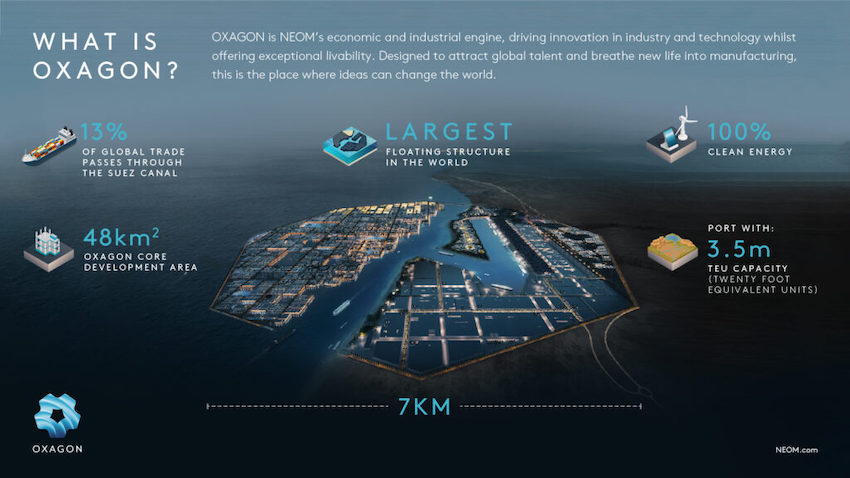 With 13 per cent of world trade passing through via the nearby Suez Canal, the new complex is said to have excellent maritime transport, road, air and high-speed rail links. The envisaged port will have a capacity of 3.5 million TEU.

The establishment of OXAGON forms the next phase of NEOM’s master plan and represents a ‘radical’ new model for future manufacturing centers, based on NEOM’s strategies of redefining the way humanity lives and works in the future.

Comprising a large area in the southwest corner of NEOM, the core urban environment is centered around the integrated port and logistics hub that will house the majority of the city’s anticipated residents. The octagonal design minimizes impact on the environment and provides optimal land usage, with the remainder open to preserve 95% of the natural environment. A defining feature of the city is the world’s largest floating structure, which will become a center for NEOM’s Blue Economy and achieve sustainable growth.

“OXAGON will be the catalyst for economic growth and diversity in NEOM and the Kingdom, further meeting our ambitions under Vision 2030,” Saudi Arabia’s Crown Prince Mohammed bin Salman commented. “OXAGON will contribute to redefining the world’s approach to industrial development in the future, protecting the environment while creating jobs and growth for NEOM. It will contribute to Saudi Arabia’s regional trade and commerce, and support creating a new focal point for global trade flows. I am pleased to see that business and development have started on the ground and we look forward to the city’s rapid expansion.”

“Through OXAGON, there will be a fundamental shift in how the world views manufacturing centers,” Nadhmi Al-Nasr, CEO of NEOM, said. “What encourages us is to see the enthusiasm of a number of our partners who have shown eagerness to start their projects in OXAGON. These pioneers of change will establish factories, developed with the latest technologies in artificial intelligence, to achieve a significant leap for this era into the Fourth Industrial Revolution. As with THE LINE, OXAGON will be a comprehensive cognitive city that provides exceptional livability for its residents.”

Next- gen fully integrated port and supply chain ecosystem
OXAGON will establish the next-gen automated and fully integrated port and supply chain ecosystem for NEOM
The port, logistics and rail delivery facility will be unified, providing high productivity levels with net-zero carbon emissions, setting global benchmarks in the adoption of technology and environmental sustainability, according to NEOM, the government agency in charge of the implementation of the futuristic project. 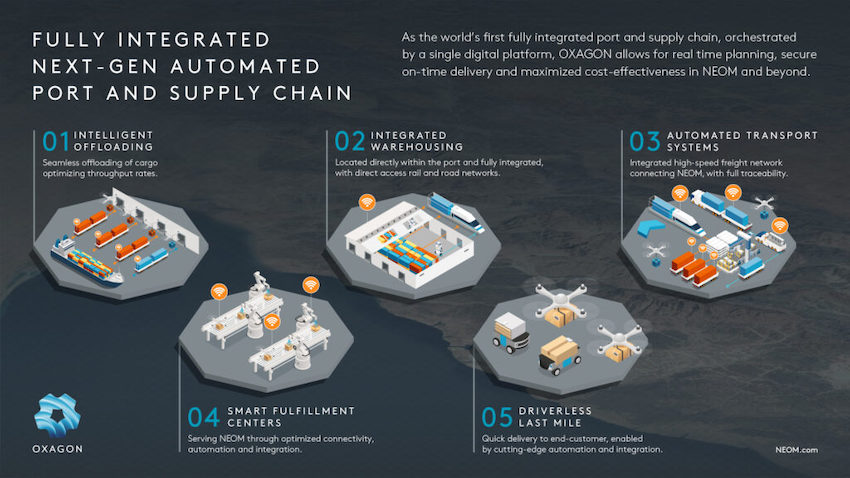 “The agile and integrated physical and digital supply chain and logistics system will allow for real-time planning, resulting in secure on-time delivery, efficiency and cost-effectiveness for industry partners,” NEOM added.

At OXAGON’s core will be the adoption of advanced technologies such as the Internet of Things (IoT), human-machine fusion, artificial and predictive intelligence, and robotics, all of which are coupled to a network of fully automated distribution centers and autonomous last-mile delivery assets to drive NEOM’s ambitions of creating an integrated, intelligent and efficient supply chain.

Seven innovative sectors, all powered by 100% renewable enenergy
The net-zero city will be powered by 100% clean energy and will become a focal point for industry leaders who want to pioneer change to create the advanced and clean factories of the future.

Seven sectors form the nucleus of OXAGON’s industrial development, with innovation and new technology creating a vital base for these industries.

Communities to be integrated with nature
Many of the features of THE LINE are reflected in the urban landscape of OXAGON.

Communities will be walkable, or via hydrogen-powered mobility. Sustainable industry will be built around the communities, minimizing commute time and providing exceptional livability with nature seamlessly integrated into the urban environment, according to NEOM.

Development of OXAGON is well underway and designs are in progress for the large manufacturing facilities.

These facilities include the world’s largest green hydrogen project involving Air Products, ACWA Power and NEOM in a tri-partite venture; the world’s largest and most advanced modular building construction factory with Gulf Modular International; and the largest hyperscale data center in the region, a joint venture between FAS Energy and NEOM.

With a regulatory system for mass support, OXAGON is expected to grow rapidly and welcome its first manufacturing tenants at the beginning of 2022.