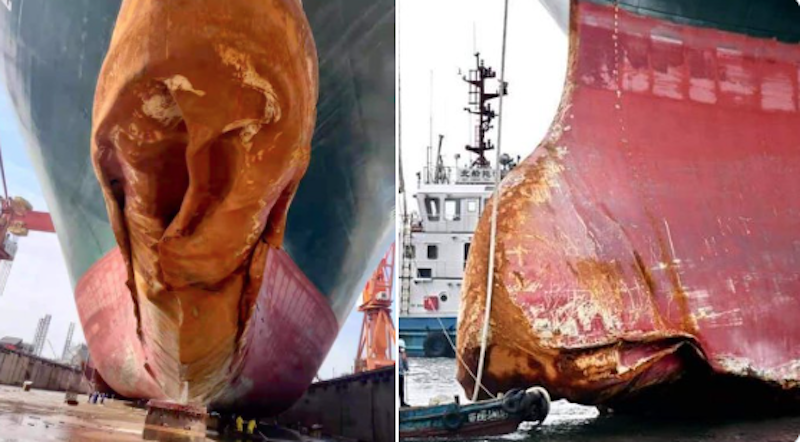 Ever Given, the giant containership that ran aground in the Suez Canal in March, has suffered the majority of damage on its bow module and the area around its bow thrusters, as well as around the rudder and propellor, new photos show.

Last month, the 20,000 TEU behemoth berthed at a ship-repairing dock of Qingdao Beihai Shipbuilding Heavy Industry Co. for ship repairs. The bow, which was lodged in the banks of the Suez Canal for six days, appears to be pushed inside the hull, according to the Twitter posts published by maritime historian and Campbell University professor Sal Mercogliano.

In his video published on Youtube, the professor explained the damage that was done, as well as the future repairing process. He emphasized that the ship was traveling at almost 13 knots when it hit the eastern bank of the Suez Canal, with the displacement of over 250,000 tonnes so the damage to the bow had to happen. Reportedly, even the bow thruster rooms were flooded.

Pictures also reveal that the bow section had several cracks, the steel was folded and that “something was added” in the front sections to discharge the water. Apparently, the ship’s classification society American Bureau of Shipping (ABS) even put limits for its traveling speed to around 11 knots.

“The plan is to cut the bow off, including the thrusters. They have three replacement modules ready to go for Ever Given. They will inspect for hull damage. Due to the ship’s size, this is considered minor repair. It was referred to as a ‘nose job’,” the professor noted.

The giant containership got stuck in the Suez Canal this March, causing a global trade disruption. After being dislodged, it was held by the Suez Canal Authority (SCA) under court order while the authority sought compensation from the vessel’s owner and its insurers. Eventually, the ship arrived at its planned destination in Rotterdam four months after grounding.