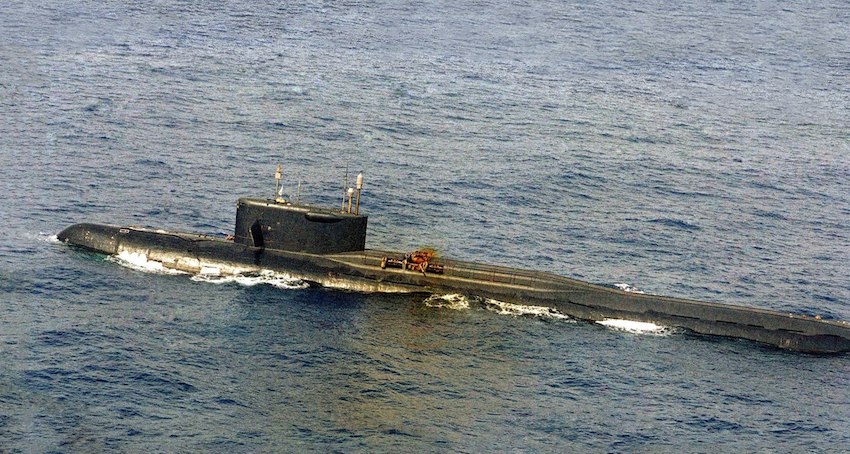 A Russian expedition to search for radioactive waste intentionally scuttled by the Soviet Navy has pinpointed where the reactor compartment for the troubled K-19, Moscow’s first nuclear powered ballistic missile submarine, was dumped.The voyage comes at a time of heightened concern over Soviet-era submarines that sank by accident,  or were intentionally scuttled, in Arctic waters during the Cold War.

Bellona has urged the eight-country Arctic Council, now convening under Russia’s two-year chairmanship, to address raising those subs, as well as dozens of other pieces of highly radioactive debris abandoned by the Soviet Navy at sea.

The researchers from Russia’s emergency services ministry and the Russian Academy of Sciences Shirshov oceanic studies institute located the reactor compartment in Abromisov Bay in the Kara Sea, off Russia’s Northwest coast “Our task is to find, map, and measure the level of danger,” Shirshov institute director Alexei Sokov told the Ecology of Russia news portal. “If the pollutant lies at the bottom [of the ocean], then it is necessary to arrange monitoring, to ensure that the shell does not collapse. If it collapses, then this will certainly entail environmental problems.

The K-19 – known to those in the navy as “Hiroshima” – was launched in 1959. During its service it suffered numerous radiation accidents that killed members of its crew. After a final accident in 1961, the two reactor compartments were cut out of the submarine’s hull, though their spent fuel was not offloaded. The reactors were mothballed in Severodvinsk by filling them with a preservative based on furfural, which was forecast to seal the spent nuclear fuel against sea water for as much as 500 years. In 1965, after the reactor compartments were thus sealed, they were dumped in the ocean. The K- 19 submarine itself, once fitted with a new powerplant, continued operations until 1990.

“The Kara Sea and the bays in the Novaya Zemlya area were for in Soviet times the place where spent nuclear reactors and old nuclear submarines were dumped,” Vladimir Gundarov, a captain 1st rank told the MK newspaper.

It wasn’t’ until the early 2000s when financial support from foreign partners – like the United States, Germany, France, Italy, Canada, Japan, Norway and others – became available to Russia for the construction of special storage facilities for naval radiation hazards.

Russian Ecologist Anna Ridiger says that radioactive waste dumps at the bottom of the Kara Sea do not pose a great environmental hazard, as the area is inhabited by only a small number of biological species.“The Kara Sea has always been a garbage dump,” she told the Lenta.ru news site. “A cemetery for everything you can imagine. Nobody gave any thought to whether it was environmentally friendly or not, they just dumped it there, where there are fewer biota. There are practically no resources, the sea is cold.” To her, the discovery of the K-19’s reactor compartment is “nothing surprising.” “But what they chose to do with it now will be interesting,” she said.

Opinions differ on whether sunken reactor compartment poses a hazard. Ridiger told Lenta.ru that “the sarcophagi for radioactive waste in the old days were really high quality, and they were well sealed.”

Captain 1st Rank Igor Kudrin, however, is confident that it is extremely dangerous – which is why an expedition is currently underway to locate such sunken objects. “Once the reactor vessels collapses, corrosion is inevitable, then underwater currents will carry nuclear waste to different regions, which can have extremely negative consequences,” Kurdin told Lente.Ru.

Nevertheless, experts agree that the sunken reactors won’t suffer damage that would lead to a nuclear explosion. Safety measures were taken before they were scuttled and it is simply physically impossible to create conditions conducive to an explosion. Even when a nuclear submarine sinks by accident, the crew takes all measures to shut down the reactor. For this, there are compensating grids and emergency protections that stop nuclear reactions in the reactor. And then, after very long periods, only as the protective barriers of the reactor plant are destroyed, can radioactive substances get into the sea water. Gundarov is surprised that the discovery of the K-19’s reactors has received as much attention as they have.

“All the places of such sinkings are marked on the maps that were published long ago,” he said. “The international ecological association Bellona in its reports indicated the places where our nuclear submarines were sunk. So this sensation is an open secret.”

However, according to Andrei Zolotkov, head of the environmental organization Bellona (Murmansk), the fact that the coordinates of the buried objects are known does not mean that they are actually located at the specified point. “There are cases when the coordinates of objects sunken in the gulfs of the Kara Sea did not correspond to reality, and sometimes even pointed to the land,” Zolotkov said. “Now expeditions are engaged in confirming the locations of the most dangerous objects, putting them on a map, and forming a special register of potentially dangerous underwater hazards. And then decisions will be made on what to do with them.” He added that, “I think that some will be raised and disposed of, while some will remain sunk at the bottom for an unknown period. Such decisions will be made as soon as reliable information is received about the technical condition of the flooded object and based on the results of a comprehensive engineering and radiation survey.”