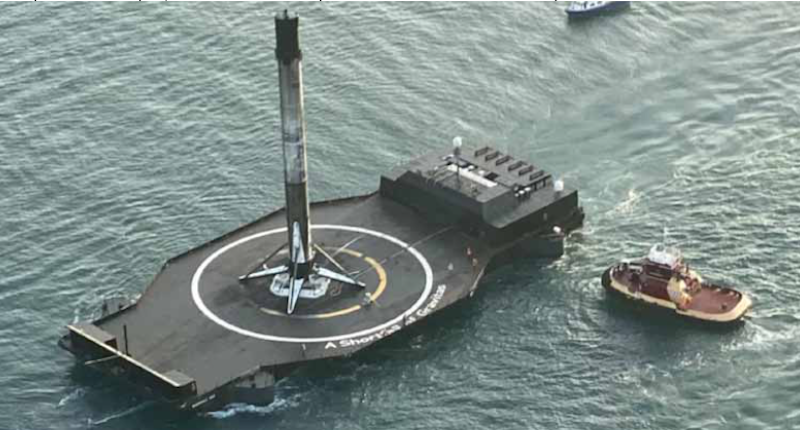 SpaceX's newest drone ship, "A SHORTFALL OF GRAVITAS" (ASOG) arrived in port Tuesday (Aug. 31) with its first catch secured to its deck. The booster, dubbed B1061 by SpaceX, launched just two days prior, carrying a cargo Dragon spacecraft to the International Space Station (ISS) for NASA.

The massive ship is the newest in SpaceX's trio of drone ships, which are designed to serve as floating landing platforms for the company's rockets to land on. It joins "Just Read the Instructions" to serve as the recovery vessel for SpaceX's East Coast launch operations, while the company's most prolific ship, "Of Course I Still Love You" has moved to the West Coast. In order to witness all the action of ASOG's first triumphant return to port, I climbed into a helicopter and soared above the waterway.

The massive ship reached the port's entrance around 7 a.m. on Tuesday morning, waiting patiently for its escort tugs to help pull it into the SpaceX docks. It took just a few minutes for my pilot to navigate to where ASOG and its cargo were hanging out. We circled the massive booster, marveling at it from every angle. This was my first time in a helicopter and I was super nervous but the flight was so smooth. Plus, seeing the booster from that altitude was incredibly exciting. It's hard to get a sense of scale sometimes, but seeing both the drone ship and booster next to its tiny tugboat (and other vessels in the area) really highlighted how big ASOG is.

B1061, now a four-time flier, was very scorched and sooty from its multiple trips to space and back. To date, the rocket has carried three different Dragon spacecraft, a broadband satellite for Sirius XM, and is the first booster to land on all three of SpaceX's drone ships. Its most recent launch, which blasted off from Pad 39A at NASA's Kennedy Space Center at 3:14 a.m. on Aug. 29, delivered a cargo Dragon spacecraft to the ISS. The robotic cargo delivery vessel was packed with 4,800 pounds (2,177 kilograms) of research and supplies for the crew.

A brief history of ASOG
In recent years, SpaceX has ramped up its launch cadence. Thus spurring the need for more ships to support its corresponding recovery efforts. SpaceX has two options when it comes to landing its rockets: on a floating platform at sea or at a designated landing pad. Return to launch site landing requires more fuel so it isn't always feasible, especially if the Falcon 9 is carrying a massive payload. So typically the company relies on its drone ships to do most of the work. The ships are mobile and require less fuel reserves on the rocket.

To that end, SpaceX built two drone ships that would recover its first-stage boosters, so they could refly multiple times. And as the company's launch cadence has increased, the need for another ship became apparent. Company founder and CEO, Elon Musk, first teased the notion of a third drone ship back in 2018. It took several years, but the highly-anticipated ship first sailed in Port Canaveral in July. Built in Fourchon, Louisiana, the ship features a new design and some improvements over the two older ships. One major improvement is that ASOG is completely autonomous. (This means the drone ship is capable of navigating itself to the recovery zone and back.)

Like the two other ships, ASOG was named to honor the late science fiction writer Iain M. Banks. All three of SpaceX's drone ships reference ships featured in Banks' "Culture" series of novels. Currently, the two veteran ships rely on tugs to help them travel to designated recovery zones for each launch. Port Canaveral rules say that ASOG still needs a tugboat to escort it through the port; however, on future missions it will have the ability to drive itself out to sea. ASOG will share recovery duties with "Just Read the Instructions" as SpaceX prepares for the rest of the year's launches. The company had a two-month lull in launches this summer as it worked to upgrade its own Starlink internet satellites.

SpaceX has aspirations of launching at least 40 rockets in 2021, a significant increase over the record 26 in 2020, work on its satellites and a potential liquid oxygen shortage may have squashed that goal, but we could see SpaceX reach as many as 30 launches for the year, which would be a new record. That is if everything goes as planned.

Sunday morning's flight out the company up to 21 so far this year, with a few left on the manifest. The next launch for SpaceX will be the Inspiration 4 mission. Set for no earlier than Sept. 15, the mission is the first all-private citizen mission for SpaceX. Launching from Pad 39A, the flight was purchased by billionaire Jared Issacman, founder of Shift4payment. He will be joined by Haley Arceneaux, Sian Proctor and Chris Sembroski. The crew will strap into a Crew Dragon spacecraft and orbit the Earth for three days as part of a mission to raise millions for St. Jude.