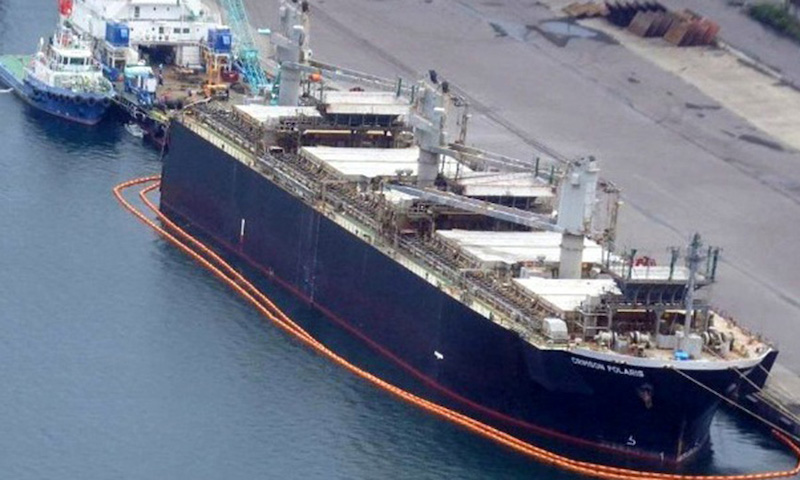 The bow part of the fragmented hull of wood chip carrier Crimson Polaris, which broke into two pieces after running aground off Japan in the first half of August, has been towed to the Port of Hachinohe.

“Due to the weather and sea conditions, the work to remove the oil from the bow of the vessel at sea was expected to take a long time, and in order to make the work smoother and safer, the shipowner and ship-management company towed and moored the vessel in Hachinohe Port with the understanding and cooperation of the local government, related organizations, fishermen, and other concerned parties,” NYK said. “The salvage company will remove the remaining oil from the bow of the ship and unload the cargo. If all goes well, the removal of the remaining oil will be completed in mid-September, and the unloading of the loaded cargo will be completed at the end of September.” “As for the stern section, the Japan Coast Guard and related parties are continuing their investigation,” NYK added.

The 49,500 dwt vessel had been swept away by a strong wind while anchored and grounded in the harbor in Aomori prefecture on 11 August.

The 2008-built Crimson Polaris managed to free itself but was forced to anchor some 4 kilometres offshore due to bad weather. The hull of the ship split the following day. All of the ship’s 21 Chinese and Filipino crewmembers were evacuated.

At the time of the incident, Crimson Polaris had 1,550 tonnes of heavy oil and about 130 tonnes of diesel oil for fuel on board, causing a large oil slick that reached the coastline of Misawa.

NYK earlier sent its personnel to assist with the cleanup of the oil spill.