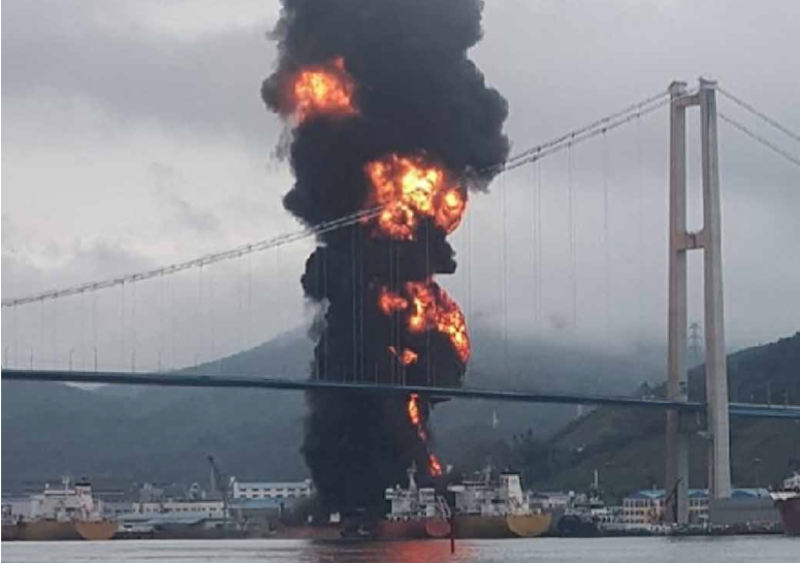 The UK government’s Marine Accident Investigation Branch (MAIB) has released its final report on the explosion on a Cayman Islands-registered ship in South Korea on 28 Sept. 2019.The massive explosion of the chemical tanker STOLT GROENLAND in the cargo port of Ulsan was caused by the rupture of a cargo tank containing styrene monomer – a colourless, oily liquid that is a precursor to polystyrene.The inquiry found that nearby heated cargo tanks caused the dangerous warming of the temperature-sensitive substance. Styrene is widely used in the chemical industry, but is thermally unstable.The explosion and subsequent fire injured two crew and 15 emergency responders.

The tank rupture resulted from runaway polymerisation, a chemical reaction of styrene molecules. It released a large quantity of vapour into the atmosphere that ignited and formed a burning mushroom cloud over the road bridge to Ulsan. It took 700 firefighters with 117 fire trucks, pumps and fire tugs six hours to fight the blaze. The investigation report found that an inhibitor compound, that was added to the tank to prevent this type of chemical reaction, had depleted more quickly than expected because of the heat from surrounding cargo tanks. Although the styrene monomer had not been stowed directly next to heated cargo, the crew had not fully appreciated the potential heat transfer through intermediate tanks, or monitored the styrene temperature, the report said. About a month before the accident, another case of styrene polymerisation occurred on the STOLT FOCUS, another Cayman Islands-registered ship that belongs to the same company, Stolt Tankers B.V.This ship’s crew noticed the heating before a critical temperature was reached and prevented a runaway reaction by adding saltwater to the tanks.

However, the ship’s crew did not alert the Cayman Islands Shipping Registry about the incident immediately, as it should have under Cayman regulations, according to the report.“In not reporting or informing other ships’ masters of the Stolt Focus marine incident, an opportunity to avoid the explosion in Ulsan was lost,” the report said. The accident investigation was carried out by the UK government branch on behalf of the Cayman Islands government. Cayman is responsible for the safety checks and protocols on licensed vessels. The report aims to help prevent similar accidents in the future and not to apportion liability or blame. Under Cayman’s Merchant Shipping Regulations, the investigation report is not admissible in any court proceedings.

The report made several safety recommendations to ensure that the guidance provided for inhibitor and styrene monomer handling is consistent and achievable “given the limitations of equipment and testing facilities on board ships”. In response to the accident, Stolt Tankers B.V. ensured that the temperatures of all cargoes carried on board its ships are monitored and reported to shore management.The company also took steps to enhance crew awareness of the hazards of heat-sensitive cargoes. Korea’s Ministry of Oceans and Fisheries has now prohibited the ship-to-ship transfer of dangerous cargo on general cargo berths in Ulsan.