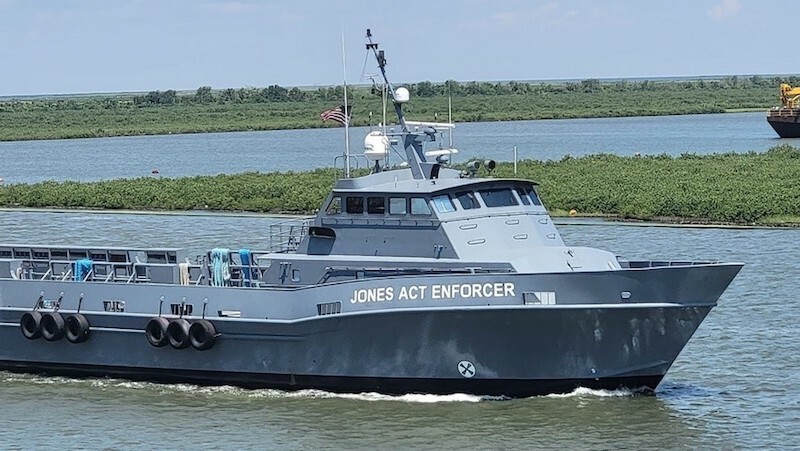 New Orleans, Louisiana—Offshore Marine Service Association (OMSA) is announcing the launch of the JONES ACT ENFORCER, a first of its kind vessel that will be used to gather video and photographic evidence of Jones Act violations. Evidence of violations will be submitted to authorities, made public and shared with the media.

The Jones Act—which requires seaborne cargo shipped between two U.S. points to be carried by U.S.- built, crewed, and owned vessels—is the primary component of U.S. maritime policy and is vital to American national, homeland, and economic security. For this reason, the Jones Act enjoys the support of the U.S. Navy, Coast Guard, U.S. Maritime Administration, and members of Congress.

Despite the Jones Act’s importance and support, the Act is not fully enforced. Specifically, unelected bureaucrats within Customs and Border Protection (CBP) have approved dozens of loophole requests from foreign vessel owners that are not found in law. Once approved, these loopholes are exploited repeatedly by other vessels. Each time the loophole is exploited, American crew members lose out.

OMSA has long fought to close these illegal loopholes through Congress, multiple Presidential Administrations, and even filing suit against CBP. These efforts have yielded progress but there continues to be far too many loopholes allowing too many foreign vessels to work in offshore energy projects.

“The Act is not being implemented in a manner that is correct under the law and as a result American security is being threatened and American workers are losing jobs to foreign vessels,” said Aaron Smith, OMSA President and CEO. “It’s time that someone takes a stand and that’s exactly what we’re doing.”  “The Jones Act is very simple, if a foreign vessel picks up cargo at one point in the United States, and takes it to another point, it has broken the law,” Smith continued. “Foreign vessels have succeeded in confusing this issue for a long time. Now, we’re going to shine a bright spotlight on their actions and show everyone just how many foreign mariners are taking money out of U.S. mariners’ pockets. If foreign vessel owners or the companies they work for don’t like this scrutiny, I suggest they hire U.S. owned, U.S. crewed, and U.S. built vessels.”

“OMSA, along with our over 140 member companies, has decided to take action with the launch of the JONES ACT ENFORCER,” said Smith. “Evidence will be collected through aerial and surface surveillance equipment made public and turned over to authorities.”

About OMSA:
The Offshore Marine Service Association represents more than 140 member companies, including approximately 60 firms that own and operate marine service vessels. These sophisticated vessels, connect America with its offshore energy resources, constructing these assets and providing every pipe, wrench, computer, barrel of fuel, and gallon of drinking water to rigs and platforms, as well as transporting tens of thousands of workers to and from the facilities. This critical flow of supplies keeps
the heart of America's energy industry pumping around the clock.
In addition to its members that own and operate vessels, OMSA’s associate members include shipyards, surveyors, vessel equipment manufacturers and distributors, training providers, financial institutions, attorneys, and accountants.

Throughout its history, OMSA has successfully represented the industry on regulatory and legislative
issues.