Franklin Offshore Directors, management and staff give a mighty Congratulations to the HMC onshore and offshore project team in carrying out the worlds heaviest jacket lift with a weight of 12,050 tonnes. The lift was completed on the 18th June offshore at the Equinor's Johan Sverdrup P2 development project,. We are truly very proud that HMC had the trust in our company for such prestige grommet slings in compliance to the IMCA LR 008, M179 Rev 1.1. guidelines as used by HMC. 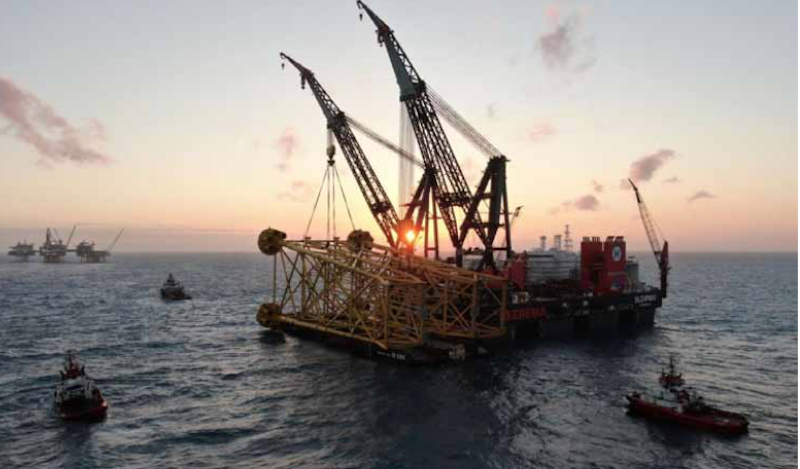 The lift was carried out with our MERLION TR Grommet slings manufactured and certified to extreme tight tolerances at our Rotterdam quayside facility.

IT’S GUINNESS WORLD RECORD NUMBER 3 FOR FRANKLIN OFFSHORE
The Franklin Offshore Group can rightly call themselves record breakers, for they have secured not one, not two, but three Guinness World Records. Most recently Franklin Offshore Europe BV – the Group’s largest business unit, based in Rotterdam in The Netherlands – has broken all previous records with the MERLION TR King Cobra cable-laid grommet sling (Sling identification number : SL 8635). It is now acknowledged as the world’s largest cable-laid grommet sling by rope diameter at 462mm; and has the world’s highest Calculated Grommet Breaking Load (CGBL) for a grommet sling at 17,484 tonnes (based on the Minimum Braking Load (MBL) of the unit rope: 1,550 Tonnes x 12 x 0.94)

Built by Franklin Offshore Europe for Heerema Marine Contractors, the sling will be used to carry out one of the world’s heaviest lifts using the world’s largest crane vessel – the 119,000 tonne ‘SLEIPNIR’. All work was undertaken in strict compliance with ‘Guidance on the manufacture and safe use of cable-laid slings and grommets’ IMCA LR 008/M 170 Rev 1.1. Before the claim could be sent to the Guinness World Record offices Franklin Offshore invited three independent witnesses to review, check and confirm three vital measurements – the cable-laid rope diameter; the calculated grommet breaking load; and the length of the sling (56,169m).

In 1992 Franklin Offshore International Pte Ltd (Singapore), at the Group’s headquarters, started the Guinness World Record ball rolling (in the days when it was a record in the ‘Guinness Book of Records’) with the largest cable-laid rope, it had a 22-inch diameter and a rope breaking strength of 11,000 tonnes.

In June 2003 Singapore was responsible for yet another record when they produced the world’s longest grommet sling measuring 110m (360.8 ft) long with a diameter of 192mm (7.55 inches) and a calculated grommet breaking load of 3,070 tonnes.