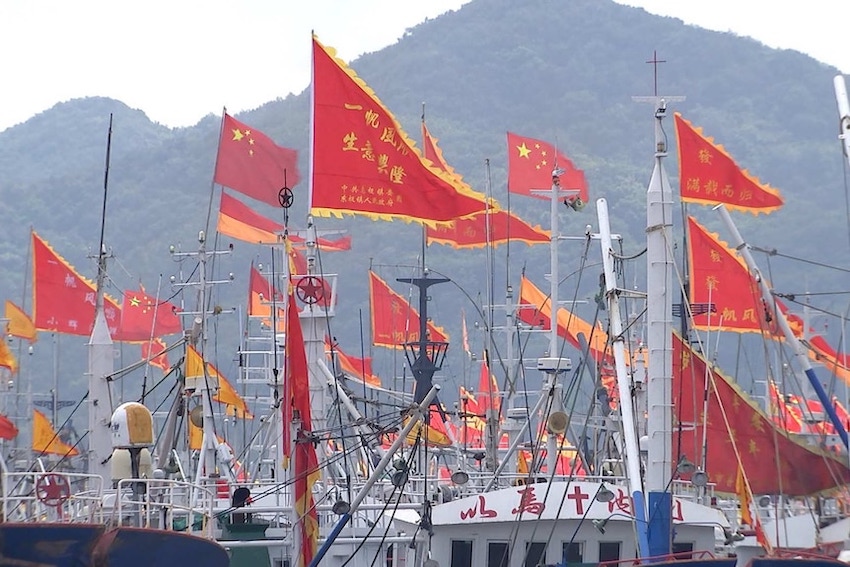 China's quest to become a maritime superpower has turned its massive fishing fleet into a floating militia that actively engages in aggressive, and often illegal, practices at sea.

Left unchecked, China's dominance would not only undermine international regulations but could also threaten the very existence of America's allies and reshape the global fishing industry forever.

The U.S. State Department, foreign governments, and conservation groups have all accused China's fleet of illegal fishing, pointing to its repeated use of banned equipment and the practice of "going dark," which involves switching off satellite tracking and entering prohibited waters without detection. China's overfishing has created a serious environmental crisis, resulting in a dangerous geopolitical power grab that could be the death knell for coastal communities that depend on the waters for their livelihood.

"No country engages in more illegal, unreported, and unregulated fishing than China," Gordon Chang, foreign affairs expert, told the Washington Examiner.
China's penchant for disregarding rules and regulations has allowed it to get the upper hand but also raises questions about the consequences of Beijing's expanding role and how it is connected to the country's geopolitical aspirations.

According to the 1982 United Nations Convention on the Law of the Sea, countries control marine resources within a 200-mile "exclusive economic zone." The water beyond that is international waters.

China has anywhere from 200,000 to 800,000 fishing boats in play, accounting for nearly half of the world's fishing activity Beijing claims to send around 2,600 fishing vessels across the globe, but maritime experts say China's distant-water fishing fleet is closer to 17,000, according to the London-based Overseas Development Institute. The United States, by comparison, has less than 300 distant-water ships.

In fact, China's distant-water vessels are so big they bring in more fish in one week than local boats from Mexico, parts of Africa, and Latin America might in a year. China's global fishing fleet has reigned supreme partly because Beijing has subsidized the industry, spending billions of dollars annually. Its boats can travel faster and farther due to a tenfold increase in diesel fuel subsidies.

“The scale and aggressiveness of its fleet puts China in control,” said Greg Poling, director of the Asia Maritime Transparency Initiative at the Center for Strategic and International Studies, adding that few countries have been willing to push back when China’s fishing boats come into their waters.

China's fishermen have been illegally fishing near the Korean Peninsula and in the hotly contested South China Sea for years. China has repeatedly ignored international treaties and overfished species to the brink of extinction.

"China will continue to take fish until the international community imposes costs on illegal Chinese fishing," Chang said. "So far, countries have shown great reluctance to protect their waters. So, yes, the Chinese are criminals, but we allow them to be."

China's fishing vessels have recently found themselves as far as Africa and South America, where fishermen, backed by armed Chinese cutters, have gone to great lengths to avoid detection by removing their identifying flags.

In Ecuador, an entire 20-person Chinese crew was arrested and jailed for four years after being caught red-handed carrying 300 tons of illegally caught fish. The crew was fishing off the Galapagos Islands, where they were caught with 6,600 sharks.

Indonesian officials have described Chinese fishing as "transnational organized crime" and went so far as to blow up at least one fishing boat. In Africa, authorities have tried to detain and fine Chinese vessels, but trawlers in places such as Ghana and Nigeria have taken advantage of poor governance, corruption, and the inability of the countries to go after maritime lawbreakers to their advantage.

One of the most egregious acts China got away with was skirting around sanctions imposed on North Korea by the United Nations in 2017. The U.N. Security Council tried to go after North Korea's squid market, one of the country's top exports, by imposing sanctions aimed at pressuring Pyongyang to give up its nuclear weapons. Despite international efforts, squid fishing continued on a large scale, with the small country raking in billions of dollars. That's because Chinese vessels forked over small fortunes to pay North Korea for fishing rights in its waters despite the sanctions specifically prohibiting the purchase of fishing rights from Pyongyang.

Not only did China's money keep North Korea financially afloat, but it also squeezed North Korea's fishermen out of their own waters and forced them to travel long distances in rickety boats to find fish. Many of those boats have washed up on the coasts of Russia and Japan, most empty or containing human remains. The crews are believed to have drowned or, in some cases, been rescued by other boats.

China hit back, telling the U.S. to butt out of its business.

"Pompeo's rebuke is about more than fishing," said Thomas Blake Earle, an assistant professor at Texas A&M University, Galveston. "Governments often use the fishing industry to advance their diplomatic agenda. ... The United States used fishing, directly and indirectly, to build its international empire from its founding through the 20th century. Now, China's doing it, too."

Chang believes the geopolitical consequences of China's dominance at sea could be devastating. "Beijing uses its fishing fleet as a weapon to break apart nearby countries," he said. "For instance, this year, China sent about 220 of its vessels to Whitsun Reef in the South China Sea in an attempt to seize that strategic feature from the Philippines. It successfully used that tactic to pry Scarborough Shoal from Manila in early 2012. Chinese fishermen have often clashed with South Korean patrol boats. Both the Philippines and South Korea are American treaty allies, and we have an obligation to defend their territories from foreign attack, such as attacks Beijing has launched with its fishing fleet."