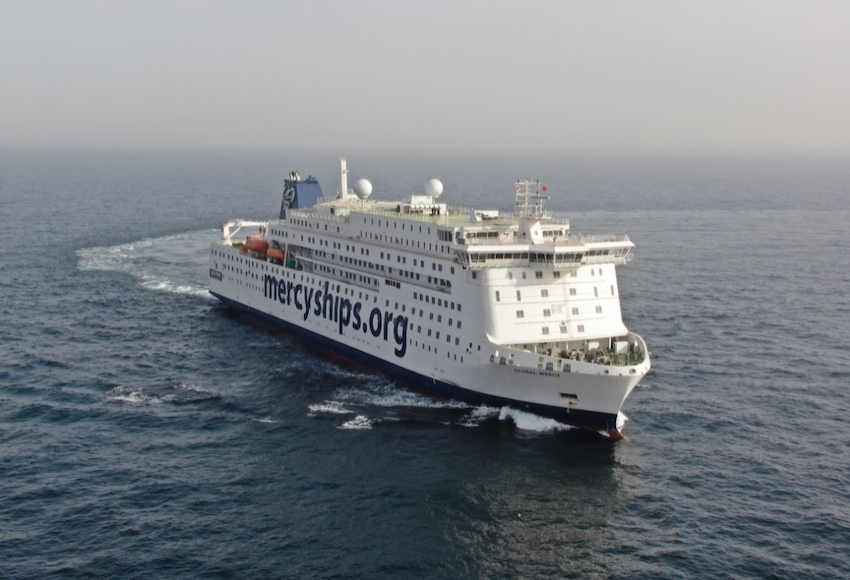 After a ceremony at the shipyard in China, the world's largest civilian hospital ship, the Global Mercy, was delivered to the charity organization Mercy Ships. Stena RoRo has been working with the global project since 2013. The maiden voyage is to Europe where the Global Mercy will be further outfitted before continuing to Senegal for her first contribution to Mercy Ship's important work in providing life-changing healthcare to the world's poorest.

The Global Mercy has been built at the Tianjin Xingang shipyard in northern China under the project management of Stena RoRo. A ceremony was held there, that by tradition will bring happiness to the ship and its crew on the seven seas, in the presence of representatives from Stena RoRo, Mercy Ships and the shipyard, as well as several partners.

"We are very proud to take delivery of this special ship," says Per Westling, managing director for Stena RoRo. "The activities to be carried out on board have placed certain special and stringent demands on shipbuilding. For the shipyard, it was the first time they had built a vessel of this type – a challenge they have managed extremely well. For Mercy Ships, the delivery means that their capacity to provide care has more than doubled, and at Stena RoRo we are happy to be a part of their fantastic work through the construction of the Global Mercy."

The ship's captain is Taylor Perez. Together with a crew recruited by the Stena company Northern Marine Manning Services and flown to China, he is now sailing the Global Mercy on her maiden voyage to Belgium, where over the course of a few months she will be staffed with volunteers and have the last of the medical equipment installed. She will then continue to Rotterdam to be presented to sponsors, future volunteers, the media and other interested parties. After that, the Global Mercy will be ready to sail to West Africa for service at Dakar in Senegal.

Mercy Ships makes a big difference for many people
Mercy Ships provides free healthcare to the world's poorest. The Global Mercy has among other things, six operating theatres, beds for 200 people, a laboratory and eye clinic. The ship is the first to have been designed and built for the specific needs of the organization. Previous vessels have been built for other operations and converted into hospital ships. Mercy Ships, whose work is based on the efforts of volunteers from all over the world, also contributes to the establishment of local skills and the infrastructure for medical care by training local healthcare personnel in the host countries. Due to this, the Global

A global project under Swedish management
The project started back in 2013. Swedish Stena RoRo has been responsible for the design, contracting and execution of the unique and global project. French Barry Rogliano Salles, BRS, has served as the broker, detailed design was by Finnish Deltamarin and construction has been carried out at the Tianjin Xingang shipyard in China. The Global Mercy, classified by Lloyd's Register in the United Kingdom, will sail under the Maltese flag and operate along the coast of Africa.