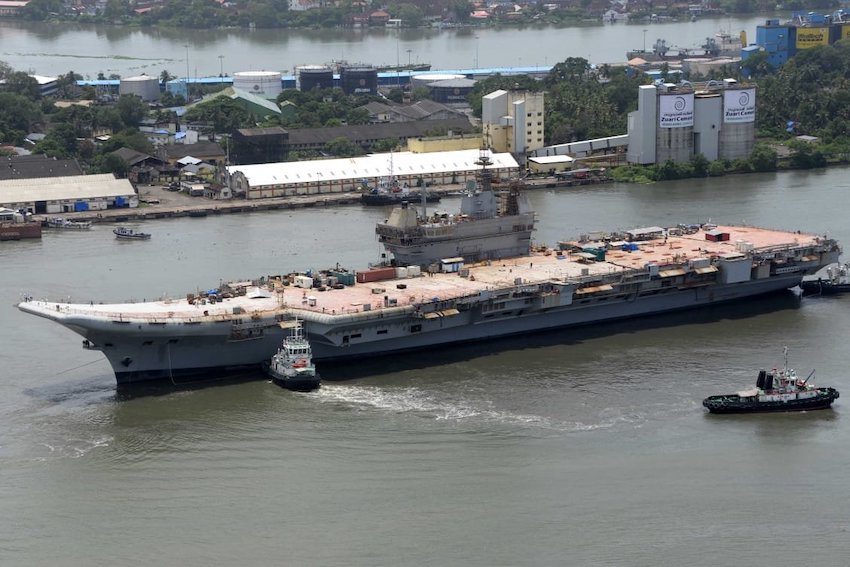 The INS VIKRANT, as the IAC-1 will be known once it is commissioned, now under construction at the Cochin Shipyard Limited at a cost of around Rs 23,000 crore, successfully completed its basin trials in November 2020.

It is by far the most complex and largest naval warship ever to be built in an Indian shipyard. India’s very own, 40,000- tonne class indigenous aircraft carrier-1 (IAC-1) is expected to catapult India’s maritime interests, adding raw power and a formidable punch to the Navy’s combat capabilities, reach and versatility on the high seas.

According to officials, the next step is the integration of several navigational, communication and operational systems.The warship, which was first sanctioned by the government in January 2003, is now being readied for its maiden contractor sea trials (CST) which are expected to start before the end of the year.

Sources in the Navy told Frontline that the sea/aviation trials will take at least a year to complete. The aircraft carrier will therefore be fully operational, at the earliest, only by mid-2023. The warship has nearly 75 per cent indigenous content — from design to sensors and steel used in the construction to key weapon systems.

The Navy expects the IAC-1 to be commissioned during the first half of 2022, marking a worthy tribute to 75 years of India’s independence.The government has repeatedly stressed that it was “fully committed” to a strong Navy with an expanded operational reach and prowess.

Defence Minister Rajnath Singh, who was on a day’s visit to the Southern Naval Command in Kochi on June 25 said: “The Navy remains poised and combat ready to tackle any challenge. The Navy's proactive forward deployment during the Galwan standoff [with China last year] signalled our intent that we seek peace but are ready for any eventuality.”The IAC-1, once fully operationalised, will operate supersonic MiG-29K fighter aircraft, Kamov- 31 air early warning helicopters, the soon to be inducted MH-60R multi-role helicopters and the naval variant of the HAL manufactured Dhruv advanced light helicopters.

Once commissioned INS VIKRANT will be India’s second aircraft carrier. The Navy’s only aircraft carrier now is the Kiev-class 44,500-tonne INS VIKRAMADITYA which was acquired from Russia for $2.35 billion in January 2004 and entered service in November 2013. The 1987-built carrier originally served with the Soviet Navy and later with the Russian Navy (as Admiral Gorshkov) before being decommissioned in 1996. India spent a further $2 billion on procuring 45 MiG-29Ks to operate from INS Vikramaditya’s deck.

The Navy has made the case for a third 65,000-tonne carrier (IAC-II). The Navy’s proposal, which was made in May 2015, is yet to get the initial “acceptance of necessity” approval from the government. Nor has the Navy’s requirement for 36 new multi-role fighters that will operate from the INS VIKRAMADITYA and IAC-1 got the nod.