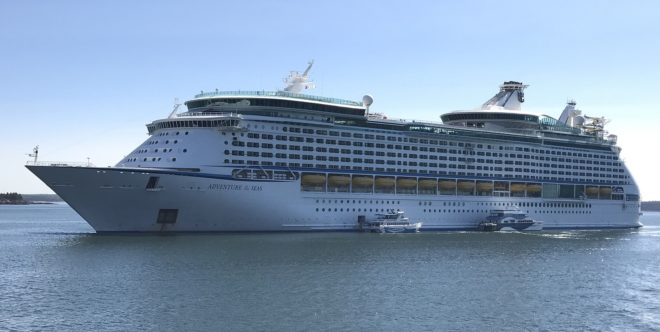 Royal Caribbean’s attempt to return to cruising continues to be marred by positive COVID-19 cases among its guests and crew members. Several news sources are reporting today that two passengers tested positive while on Royal Caribbean’s Adventure of the Seas.

Skift reports that “Royal Caribbean Group said on Thursday two guests on its cruise liner, Adventure of the Seas, had tested positive for COVID-19.  Both guests were not vaccinated and had been quarantined before they disembarked on Thursday in Freeport.” CNBC adds that “both guests were unvaccinated and under the age of 16. One guest is asymptomatic and the other is experiencing mild symptoms,” according to the cruise line.

The two infected guests and their travel party disembarked in Freeport, Bahamas and are on their way home to Florida, Royal Caribbean said in a statement according to Cruise Industry News.

The Miami Herald report that the positive cases were discovered five days into an eight-day cruise from Nassau, after the ship made stops in Cozumel and the company’s private island in the Bahamas. Two children under 16 years who old tested positive for COVID-19 were flown by Royal Caribbean back to the states in a private jet.

The two COVID-19 positive guests on this cruise ship brings the total number of Royal Caribbean ship guests and employees, on cruise ships operated by the company, who tested positive in the last four weeks to nineteen (19), including:
• 13 crew members on the Odyssey of the Seas on March 24th and June 10th; and
• 4 crew members on the Anthem of the Seas on June 20th.

Including the two passengers on the Celebrity Millennium, owned by Royal Caribbean, who tested positive on June 10th, the total infected in the last month on Royal Caribbean owned cruise ships is twenty-one (21).

This brings the total number of positive COVID-19 cases since the cruise industry was shut down last year to 239.

Taking a cruise during a pandemic remain dangerous, particularly so if you are unvaccinated and as the new Delta variant continues to emerges. Taking children, who can’t be vaccinated yet, on a cruise is the height of irresponsibility.

There is a risk of spreading the virus by unvaccinated cruise guests to member of the port communities which usually have a much higher rate of unvaccinated people.