Four down, two to go: World’s largest floating wind farm off Aberdeen to complete next month 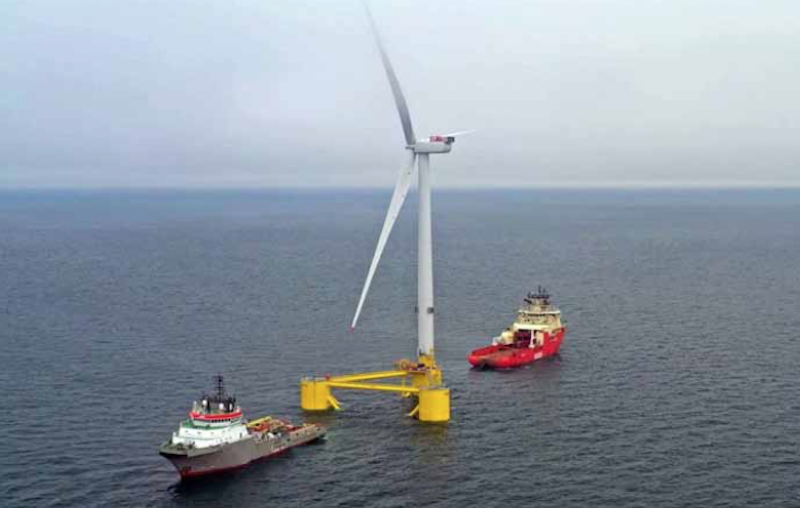 Installation of the world’s largest floating wind farm off the coast of Aberdeen is due to complete next month.

Contractor Boskalis has released images of another floating turbine being installed at the Kincardine Offshore Wind Farm in foggy conditions last weekend. There are now four turbines, including one put in place in 2018, sitting at the site, just nine miles off the coast.Only two are yet to be put in place which planned to be installed in July, the marine services firm said, releasing a statement and pictures on social media.

Boskalis said: “The construction of the Kincardine Floating Wind Farm is progressing well. Last weekend we connected floating turbine number 4 to the pre-installed mooring spread “While the anchor handlers Manta and Kestrel kept the floater in position, the Nicobar launched her ROV that connected the mandrel from the seabed to the receptacle on the floater “This was followed by pulling in the mooring lines with the winch on the floater. A successful operation in the foggy vicinity of Aberdeen, Scotland. We are looking forward to installing the fifth and last floating turbine in July!”

The 50MW project off Aberdeen will become the world’s largest floating wind farm upon completion. In April, Boskalis announced that the “final campaign” was underway for the scheme with the arrival of a huge floating foundation travelling from Spain to the Netherlands.