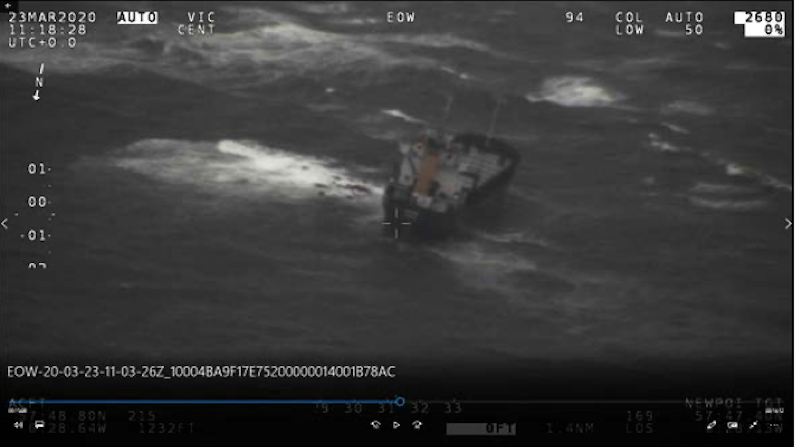 At 0141 on 23 March 2020, the general cargo vessel Kaami ran aground on Sgeir Graidach shoal in the Little Minch on the west coast of Scotland, while on passage from Drogheda, Ireland to Slite, Sweden. The crew were safely evacuated from the vessel by coastguard helicopter and Kaami was successfully refloated by salvors on 4 May 2020. There were no injuries but the damage to Kaami’s hull was extensive and the ship was declared a constructive total loss.

The MAIB investigation found that:

●  A full appraisal of information was not made in the voyage planning process, the master instead relying on previous experience of navigating the Little Minch, leading to an IMO adopted recommended route not being used.

●  No calculation of a minimum under keel clearance for the vessel in her departure state was undertaken, and as such the safety contour settings on the electronic chart display and information system (ECDIS) were not correct. The safety contour values had not been changed since the crew had joined the vessel a month before.

●  A visual check of the route using appropriately scaled electronic navigation charts was not conducted and the ECDIS route safety check was not carried out.

●  A second check of the voyage plan did not take place which meant the plan was created by a single person in isolation. With no ECDIS route safety check conducted, several errors, including two locations where Kaami would likely run aground were missed.

●  Monitoring of the passage was ineffective as the look ahead features on the ECDIS were not activated and the use of the lookout was not effective. It is probable that the chief officer was also suffering from the effects of fatigue.

●  The watchkeepers at Stornoway Coastguard Operations Centre did not intervene prior to Kaami’s grounding as they were unaware of the developing situation, even though the watchkeeper of a local fishing vessel had warned Kaami on very high frequency radio channel 16 a few minutes prior to the grounding.  Following this accident, actions have been taken by the ship managers, Misje Rederi AS, as well as the Maritime and Coastguard Agency.

Recommendations have been made  to Misje Rederi AS to review the number of watchkeepers on its vessels with the aim of minimising the hazards associated with fatigue, improve the guidance given in its safety management systems on the effective use of ECDIS and of bridge lookouts, and to enhance its ability of conduct internal navigation audits.