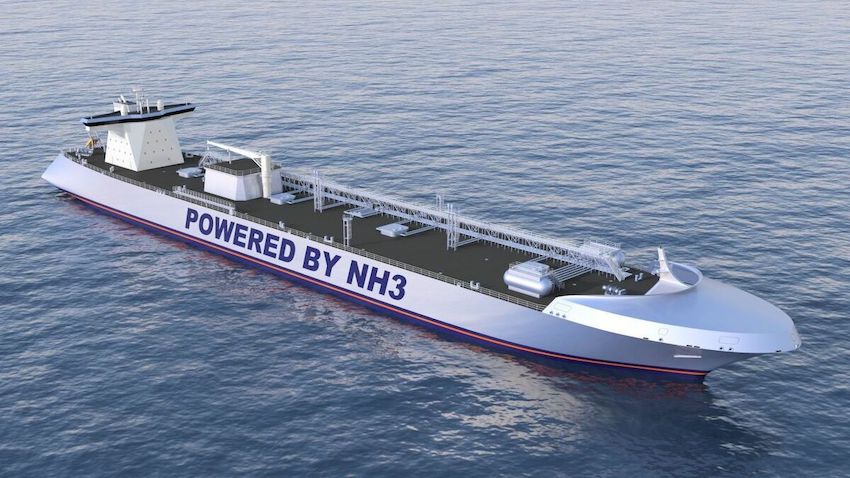 While momentum is building for the transition to zero-emission shipping, with significant research focusing on ammonia as a fuel source, much remains yet to be proven in the technical and financial case. A consortium of Nordic companies joined together to joined together in a new concept study exploring the business case for ammonia, seeking to confirm its potential scalability and application on long-distance routes. The Nordic Green Ammonia-Powered Ship concept study concludes that green ammonia holds the potential to play a significant role in decarbonizing maritime transport if investors and operators are presented with a credible business model.

“Understanding the technologies and business models needed to deliver zero-emission shipping is key,” says Jesse Fahnestock, Project Director at the Global Maritime Forum who along with Fu?rstenberg Maritime Advisory developed the project. “The NoGAPS concept study examines the full value chain viability of powering ships with green ammonia. It finds that using green ammonia as a fuel is both practical and feasible. Focus should now be on measures that can strengthen the business case for zero-emission ammonia.”

The consortium investigated using a hypothetical mid-sized gas carrier using ammonia as its fuel source. Believing that green ammonia-powered shipping has a significant potential to contribute to the decarbonization of the maritime sector is significant, they decided that ammonia carriers present a logical starting point for demonstrating this potential. The project set out to explore the vessel, the fuel, and the fueling options, as well as the business, financing, and policy considerations.

They concluded that powering a vessel by using ammonia as a fuel is both practical and feasible and the engines required sold be available by 2024. They believe that good solutions are being developed to the challenges such as reducing the release of unburnt gas and the potentially harmful emissions. In addition, they found that there are no significant technical barriers toward the large-scale production of green ammonia.

“The NoGAPS study has helped to identify the most pressing problems and possible solutions for ammonia-powered, zero-emission shipping, from the perspective of the entire maritime value chain,” said Sofia Furstenberg Stott, Partner at Furstenberg Maritime Advisory. “The Nordic region is home to plentiful renewable energy, large-scale ammonia production, and some of the world’s leading shipping companies and engine manufacturers and has an opportunity to build the full value chain for green ammonia-powered shipping on an accelerated timetable.”

The project concluded that “Neither the technical considerations nor the associated regulatory approval for a green ammonia-powered vessel present major obstacles to putting the M/S NoGAPS (the hypothetical vessel used for the study) on the water.” The project leaders reported that ammonia synthesized from green hydrogen represents a credible long-term, zero-emission fuel.

“We have found the NoGAPS study to be an interesting and valuable process, as it has brought together the entire value chain – for example, ammonia producers, energy providers, ship designers, rule-makers, and engine manufacturers alongside financial institutions – to explore the possibilities of ammonia-powered vessels. There are still areas to be explored, but NoGAPS has taken some big steps along the path to ammonia-powered shipping,” says Hans-Henrik Ahrenst, Performance Manager, Naval Architect, BW Epic Kosan.

The report identified the next steps as well as the barriers that will still have to be overcome. They recognized that the cost of building a first-of-its-kind ammonia-power ship will be significantly higher, possibly as much as a third, more than conventional ships. Yet they believe that the most important challenge to be overcome is to develop and demonstrate a business model that is credible in the eyes of investors and operators. Both the vessel design and the fuel sourcing strategy offer opportunities to reduce risks and costs in meaningful ways, says the project’s report.

Government support and public finance can both accelerate the short-term timetable for investment in demonstration and improve the outlook for long-term deployment of green ammonia as a shipping fuel.

Due to the currently higher costs of green ammonia relative to conventional shipping fuels, the NoGAPS project report also outlines a number of measures and complementary measures from governments that can strengthen the business case for green ammonia-powered shipping.