In an attempt to acknowledge the efforts of women in breaking down the stereotypes in erstwhile male-dominated maritime sector, Union Minister Mansukh Mandaviya has flagged off an all-women crew onboard Shipping Corporation of India (SCI) vessel MT Swarna Krishna, the Ministry of Ports, Shipping and Waterways said on Sunday. The vessel was virtually flagged off by the Ports, Shipping and Waterways Minister on 6 March, it said.

"The Shipping Corporation of India, as a part of its ongoing Diamond Jubilee celebrations and also to commemorate the International Women's Day on 8 March, 2021, achieved another feat when Mansukh Mandaviya, Minister of State (Independent Charge) for Ports, Shipping and Waterways, virtually flagged off the 'All Women Officers' Sailing' on MT Swarna Krishna SCI's product carrier from JNPT Liquid Berth Jetty on 6 March, 2021," the Ministry statement said. This is the first time in the world maritime history that a ship is being sailed by all women officers, it added. 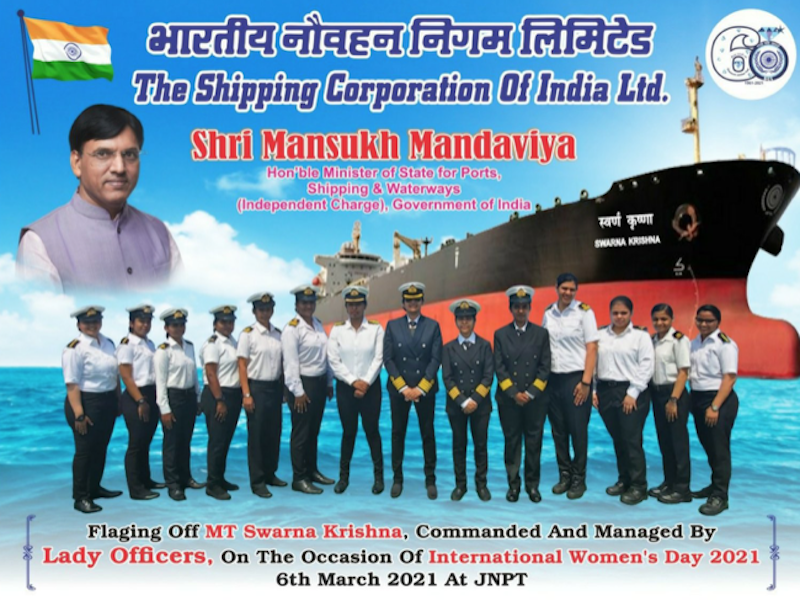 Mandaviya acknowledged the contribution and sacrifice of the women seafarers who acted as the Indian ambassadors to the global maritime community and had made the nation proud, it said. HK Joshi, CMD, SCI, spoke of the unabated and relentless pursuit of SCI to realise the paradigm shift' in the maritime sector which has recognized and honoured the empowered womanhood' in seafaring women who have dared, endeavoured and sacrificed to achieve it.

"The move demonstrated the gradual shift in the perception of seafaring as a male-oriented profession and the principles of Diversity and Inclusion that SCI upholds. SCI has been a pioneer in employing women seafarers onboard its vessels and has implemented various initiatives including age relaxations and fee concessions to aspiring female cadets through its Maritime Training Institute to promote their integration into the maritime sector," the statement said. .