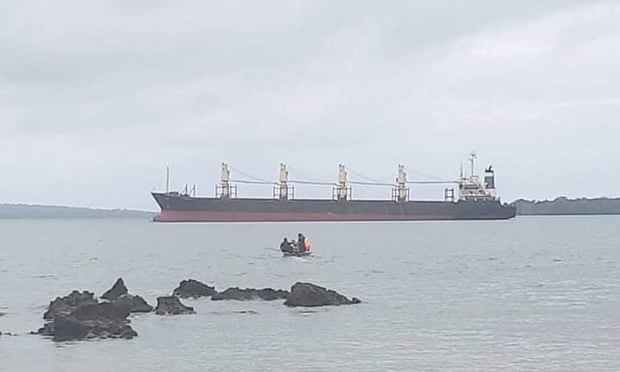 Two years after a catastrophic oil spill in the vicinity of the UNESCO listed World Heritage Site, the Solomon Islands government is dealing with another similar incident.

A Panama-flagged bulker has been accused of deliberately discharging heavy fuel oil (HFO) into the pristine waters of Graciosa Bay, Temotu Province, The Island Sun reported.

The ship, identified as MV Quebec, arrived in the area on 20 January 2021 for a logging shipment for China’s logging company when it started discharging thick oil into the bay.

In early February, the government’s National Disaster Management Office (NDMO) sent a technical assessment team to the site. An initial assessment showed that the 28,500 dwt bulk carrier spilled around 1,000 tonnes of HFO, reaching the second level of pollution.

“For us, it is clear that this is deliberate pollution of our seas. It’s not accidental, what we have found out is the boat has mismanagement in terms of their systems and most probably their system has always been in the position to pollute the sea,” Thierry Nervale, Director of Solomon Island Maritime Authority (SIMA), was cited by SIBC as saying.
“All committed offenses have been indicated and the master of the ship will be charged according to our laws,” he added.

The Solomon Islands will manage the incident response internally without seeking assistance from other countries as in 2019, given that the oil spill is confirmed to be at level two.

What is more, the oil spill is said to be more localized when compared to the 2019 disaster.

Back in February 2019, Solomon Trader, a bauxite bulk carrier carrying an estimated 700 tonnes of HFO, grounded on a reef off Rennell Island in the Solomon Islands, near the largest coral atoll in the world, a UNESCO World Heritage Site, during an unexpected gale event. The incident turned into an environmental disaster, as more than 100 tonnes dispersed across the island’s sea and shoreline, contaminating the ecologically delicate area.