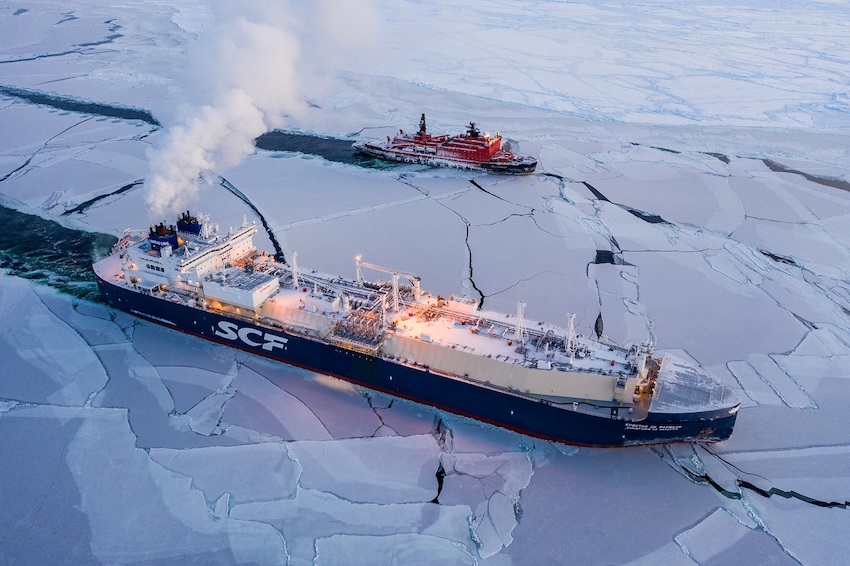 During an official meeting with the government of the Russian Federation, Igor Tonkovidov, President and CEO of PAO Sovcomflot, reported to Yury Trutnev, Deputy Prime Minister of Russia, on progress with the experimental round trip voyage of the LNG carrier Christophe de Margerie from Sabetta (Russia) to Jiangsu (China) and back, using the Northern Sea Route.

During the meeting, Yury Trutnev received reports via a video conference link from Sergey Gen, Master of the LNG carrier, and Dmitry Lobusov, Master of the nuclear icebreaker 50 Let Pobedy, before wishing the crews of both vessels a safe journey.

The LNG carrier Christophe de Margerie is currently completing her experimental round trip voyage. For the first time in history, a large-capacity cargo vessel is transiting the eastern sector of the Northern Sea Route (NSR) in February. Traditionally, transit navigation along this segment of the NSR ends in November and only resumes again in July.

After discharging her cargo at the port of Jiangsu in China on 27 January, the vessel sailed back towards Sabetta, and on 7 February, upon reaching the eastern end of the Northern Sea Route, Cape Dezhnev, met the icebreaker 50 Let Pobedy, which then escorted her back to Sabetta. At the time of the report, Christophe de Margerie and her nuclear icebreaker escort were approaching the Vilkitsky Strait in the Laptev Sea.

The convoy is scheduled to arrive at the port of Sabetta (the Gulf of Ob in the Kara Sea) on 19 January 2021.

Yury Trutnev, Deputy Prime Minister of Russia, was quoted as saying:
“The Northern Sea Route is a transportation route of major importance for Russia. Using NSR makes it possible to cut the travel time from Europe to Asia by sea by more than a third. In 2020, almost 33 million tonnes of cargo were transported along the Northern Sea Route, including over 18 million tonnes of liquefied natural gas. In the last five years, the cargo traffic along the NSR has grown almost fivefold, but in fact, the route can handle a lot more than that. In accordance with a decree issued by the President of the Russian Federation, the cargo traffic along the Northern Sea route should increase to 80 million tonnes per year by 2024. One way that target can be achieved is by expanding the period of Arctic navigation.”

Igor Tonkovidov, President and CEO of Sovcomflot, said the following in his presention:
“The current voyage of Christophe de Margerie significantly expands the navigation window in the in the eastern sector of the Russian Arctic, and confirms that year-round safe navigation is possible along the entire length of the Northern Sea Route. This will result in more efficient use of this transportation corridor for the Russian economy by facilitating the implementation of large-scale industrial projects in the Russian Arctic. SCF’s extensive experience of operating vessels in the Arctic suggests that working in this region requires  major additional competencies and a very high level of discipline from vessel crews. In the near future, we expect the demand for appropriately competent crew members to significantly increase. From 2023 to 2025, the company plans to take delivery of 18 new-generation icebreaking LNG carriers to service the Arctic LNG 2 project, which will create over a thousand new jobs for Russian seafarers. In 2020, Sovcomflot initiated a large-scale programme to train the required personnel from its existing officers. We also believe more efforts should be made to train these kinds of professionals within the Russian system of maritime vocational training.”

Sergey Gen, Master of Christophe de Margerie, had the folollowing to report:
“The voyage of Christophe de Margerie is going normally, the vessel is in full working order, and all the 33 crew members are in good health. We consider the ice conditions encountered along the route as challenging, though within the expected parameters. The biggest issues faced by the vessel were ice pressure and ice hummocks in the Chukchi Sea and the East Siberian Sea, through which we had to move astern (the vessel had to move astern through the ice for about 10 per cent of the time she travelled along the Northern Sea Route so far). Throughout the passage along the Northern Sea Route, we have maintained a safe speed under the ice and weather conditions. I should like to give special thanks to the Master of the icebreaker 50 Let Pobedy and his crew for the outstanding escort work.”