Wakashio captain back in court as stern removal operations get underway 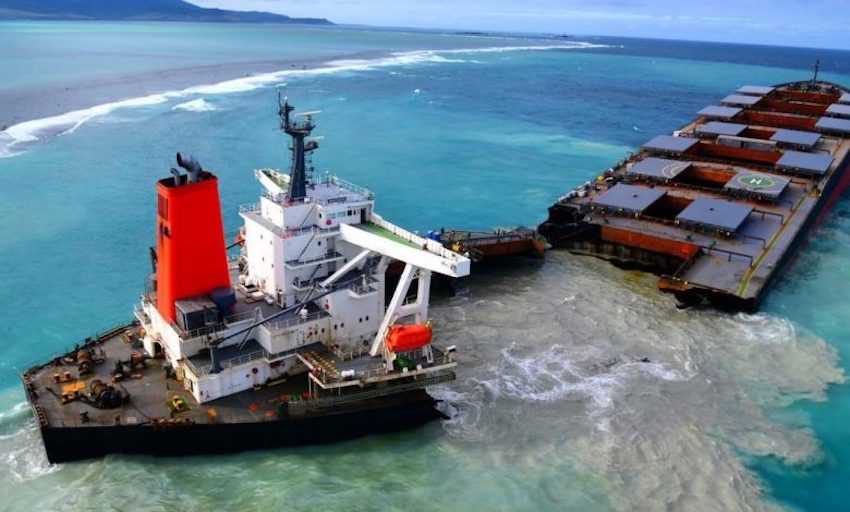 Nearly six months on from its grounding in pristine waters off Mauritius salvage operations to remove the stern of the Wakashio newcastlemax have got underway this week.

The delicate process to remove the stern from a coral reef is being undertaken by a Chinese salvage firm, Lianyungang Dali Underwater Engineering, who have deployed a crane barge, Hong Bang 6, to move it.

The ship’s captain, Sunil Kumar Nandeshwa, is reappearing in court today. His chief officer, Hitinamillage Tilakaratna Subodha, last week told the court that the master had diverted the ship’s course to get closer to the Mauritian coastline in search of a wifi internet connection, something he did regularly around the world.

Mitsui OSK Lines (MOL) was the charterer of the Wakashio, a 300 m long giant of the seas, owned by Nagashiki Shipping. En route to Brazil from Asia, the ship diverted from its course, running aground on pristine coral reefs just off southern Mauritius on July 25. The bulk carrier would go on to spill around 1,000 tonnes of bunker fuel, creating the worst ecological disaster the Indian Ocean republic had experienced. The Wakashio then split in two.

In a release from December last year announcing measures to prevent another reoccurrence of a Wakashio style disaster, MOL gave the reason the ship had changed its passage plan from leaving a 22 nautical mile gap between it and the island of Mauritius to just two nautical miles. The reason cited, according to the release, was “to enter an area within the communication range of mobile phones”. Moreover, MOL revealed the crew were using a nautical chart without sufficient scale to confirm the accurate distance from the coast and water depth. In addition, MOL said a crewmember neglected appropriate watch-keeping, both visually and by radar.