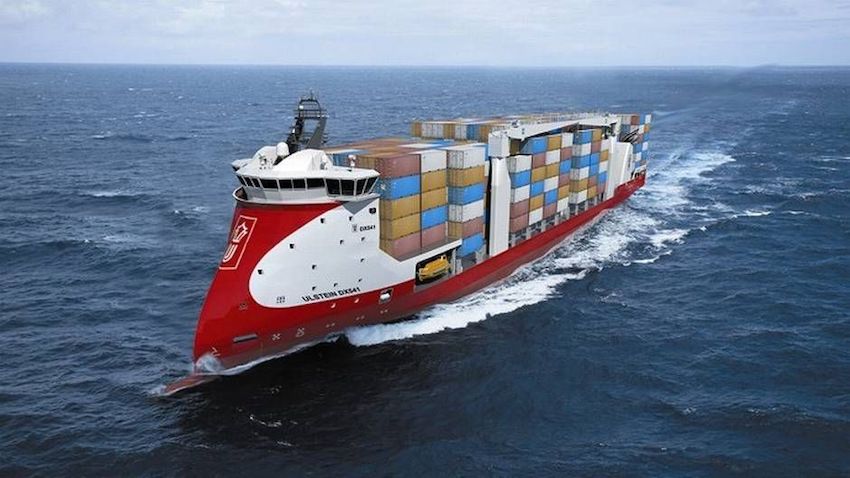 The X-Bow allows for possible lower level forward placement of the ship’s control-bridge above and immediately behind the bow of future container ships. Such ships would carry containers to the rear of and stacked to higher elevation than the bridge, with telescopic air intakes that extend upward above the containers, located near the ship stern to supply air to the engine. The combination could offer greater operational versatility on select ship routes.

Introduction
Container ships carry most of the world’s trade and despite the pandemic lockdowns being enforced in many countries and ongoing trade disputes with China, future trade moving aboard container ships is likely to increase. The closures of factories in China translates to factories producing consumer goods at competitive prices being opened in other nearby Asian nations, with major Asian container transshipment terminals processing greater numbers of containers within as little as a decade. In Egypt, the Suez Canal Commission has planned for a future where large container ships will sail along the canal.
Plans are underway to develop twin navigation channels at greater navigation depth to transit wider, deeper draft, slightly longer and slightly higher container ships built to 28,000 to 34,000-TEU capacity. Installing the ship control bridge above the bow allows for higher stacking of containers while installing telescopic air intakes at the stern area would allow for air to flow above the containers and into the air intakes. Upon approach to a bridge, the telescopic air intakes would briefly retract. The dynamics of the X-bow when sailing through waves enhances prospects for forward located control bridges on future container ships.

Port Bridges
Ships sail below bridges on approach to many ports internationally. While some bridges can be rebuilt to greater height as was the case with the Bayonne Bridge on approach to the Port of New Orleans, bridge rebuilding is sometimes not a viable option for mainly cost reasons. The combination of redesigning or reconfiguring a ship and modifying its route operations and schedule offers a possible solution at several ports internationally. The X-bow allows for a low-elevation bridge located above and slightly behind the bow, with containers stacked to well above the height of the bridge.
A ship built to such configuration could sail through severe wave conditions across the North Atlantic to a transshipment terminal such as Quebec City or Halifax, where the upper levels of containers would be removed for transshipment. The ship would rise in the water to shallower sailing draft and telescopic air intakes retracted to allow the vessel to sail under the Bayonne Bridge into Port of Newark, under the Arthur Ravenel Bridge at Port of Charleston, under the Dames Point Bridge at Port of Jacksonville (JaxPort) and under bridges located between Ports of Montreal and Quebec City

Ship stresses
Traditional ship bows built with the conventional bow configuration tend to pitch when sailing into waves. Comparison sailing in identical severe wave conditions involving a ship built with a conventional bow and the other with the X-bow revealed that the X-bow responds with less slamming while the deflector built high above the bow redirects water spray away from a forward bridge. A vessel built with the combination of X-stern and X-bow offers reduced pitching when sailing at near steady cruising speed through severe wave conditions, in turn potentially reducing wave induced structural stresses along the vessel hull.
Stress induced by vessel pitching motions when sailing through severe wave conditions is one of the factors that restricts ship length. Depending on the amount by which the combination of X-bow and X-stern reduces pitching induced structural stresses, there may be scope to slightly extend vessel length and slightly increase the number of containers that it could carry. Further research would be required to determine possible lengthening of future container ships built with the combination of X-bow and X-tern, compared to vessels built with conventional bow and stern.

Montreal Configuaration
The maximum size of ship allowed to sail to Port of Montreal would measure 44-m beam by 294-m length. By comparison, the older generation Panamax ships that sailed to Montreal were built to 32-m beam. A container ship of 44-m beam by 294-m length and 10-m draft at part load may be built with combination X-bow and low level forward bridge, with upward extending telescopic air intakes at the stern area. When sailing on the ocean, it would sail at greater draft with containers stacked higher than the bridge, to be partially offloaded at Quebec City container terminal.
After being partially unloaded, sailing draft would decrease to 10-m with top level of bridge at same height as earlier generation Panamax ships. Air intakes would be retracted so as to allow vessel to sail to Montreal, carrying 17-container widths across its hull compared to 12-container widths of the earlier ship. A ship of such configuration could carry an additional 40 percent more containers to Port of Montreal compared to earlier Panamax ships.

Suez Configuration
The future navigation dimensions along Suez Canal parallel channels would likely allow for 1-TEU additional sailing draft, up to 3-TEU additional widths, 2-TEU additional height above water with forward bridge and 4-TEU additional length. The air draft restriction imposed by the bridge across the Suez Canal enhances future prospects for future mega-size container ships built with a low-level forward bridge, enhancing prospects to consider X-bow. The need to maximize container carrying capacity aboard future container ships enhances prospects to research whether combining X-bow with X-stern would sufficiently reduce pitch motion induced structural stresses to allow for ship lengthening.
Future trade between Asia and North America is likely to recover and increase, with larger container ships sailing via the Suez Canal and Western Mediterranean transshipments ports to North American east coast ports. The future operational success of container transfer technology at Halifax transshipment extended terminal would be essential for supersize container ships built with low-level forward control bridge to partially offload containers prior to sailing to Port of Newark. Interline ships would then carry the containers from Halifax to Boston, Portland, also Philadelphia and Baltimore via Delaware Bay along with ports located along the St. Lawrence Seaway.