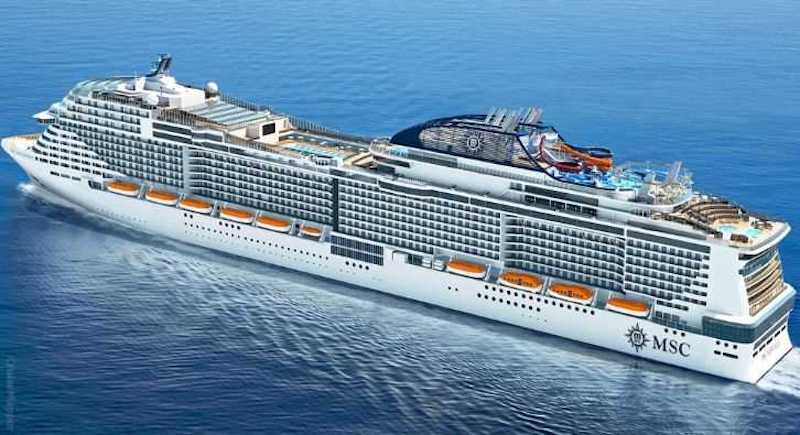 As a sister ship to MSC Grandiosa, the newbuild features a length of 331 meters, a width of 43 meters and a maximum capacity of 6,300 passengers.

The two Meraviglia-Plus units are part of the company’s EUR 9 billion investment plan for eleven new next-generation cruise ships that are set to come into service by 2026. The Meraviglia-Plus ships are a further evolution of the Meraviglia class prototype, increasing their GRT to 177,000 with 2,450 guest cabins.

It also features selective catalytic reduction (SCR), underwater radiated noise system reducing impact on large-size marine mammals, a ballast water system, a purification system for the waste water, shore-to-ship power connectivity, as well as other technologies aimed at cutting CO2-emissions including an anti-fouling paint.
MSC Cruises said that this was the last newbuilt ship in the company’s fleet to be powered by conventional fuel adding that it plans to move to LNG as fuel with three LNG-powered ships under construction and expected to be delivered by 2025.

“Our long-term goal is to achieve a zero-impact cruise operation and this is the journey we are on today. MSC Virtuosa represents another important step in this direction together with our other investments in the accelerated development of next-generation environmental technology. It also confirms our long-term firm commitment to achieving this ambitious goal,” Pierfrancesco Vago, Executive Chairman, said.

The cruise ship is expected to embark on its maiden cruise in April with four cruises in the Mediterranean of 3-,-4- and 10-nights before the ship moves to her new homeport of Kiel, where she will commence her Northern Europe itineraries from 8 May.

2021 will see the launch of two new MSC Cruises next-generation ships – the second one being MSC Seashore – bringing the fleet total to 19, with a further four to be launched by 2025.