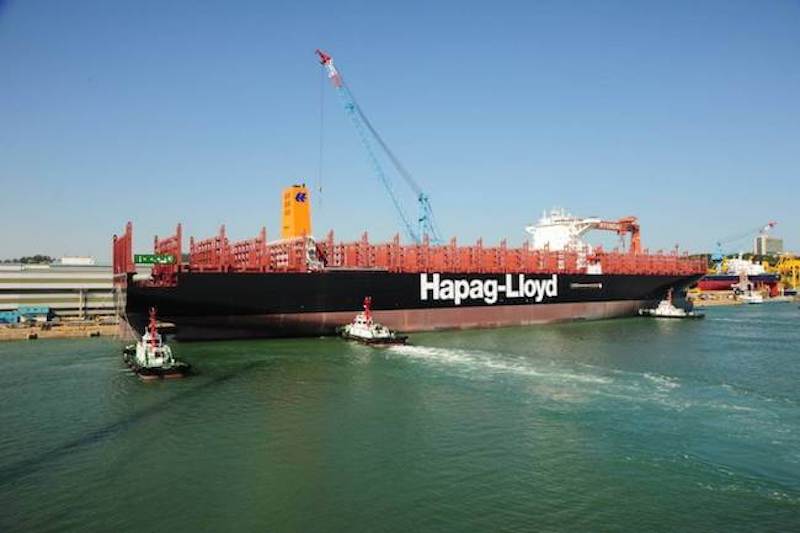 Hapag-Lloyd has signed an order for six ultra large container vessels. The Korean ship yard Daewoo Shipbuilding & Marine Engineering will build the 23,500+ TEU vessels and deliver them to Hapag-Lloyd between April and December 2023.

The vessels will be deployed on the Europe – Far East routes as part of THE Alliance and will significantly increase Hapag-Lloyd´s competitiveness in this trade. As part of Hapag-Lloyd sustainability strategy the vessels will be fitted with a state-of-the-art High Pressure dual fuel engine, which will be extremely fuel efficient. The engine will operate on LNG, but has alternatively sufficient tank capacity to operate on conventional fuel.

Rolf Habben Jansen, CEO of Hapag-Lloyd said: “With the investment in six ultra large container vessels we will not only be able to reduce slot costs and improve our competitiveness on the Europe – Far East trade, but also take a significant step forward in modernizing our fleet. Additionally we will further reduce our environmental impact.”

The investment will be around one billion US Dollar. The respective financing has already been secured.

About Hapag Lloyd
With a fleet of 234 modern container ships and a total transport capacity of 1.7 million TEU, Hapag-Lloyd is one of the world’s leading liner shipping companies. The company has around 13,200 employees and 388 offices in 129 countries. Hapag-Lloyd has a container capacity of approximately 2.7 million TEU – including one of the largest and most modern fleets of reefer containers. A total of 121 liner services worldwide ensure fast and reliable connections between more than 600 ports on all the continents. Hapag-Lloyd is one of the leading operators in the Transatlantic, Middle East, Latin America and Intra-America trades.