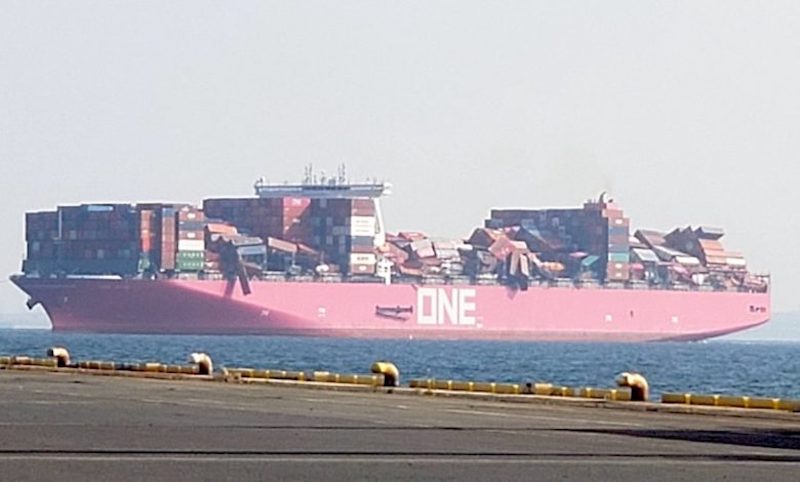 Unloading of containers of the badly damaged ONE APUS is proceeding slowly at the Japanese port of Kobe with the operation to remove all boxes expected to take more than a month.

The 14,000 teu vessel ran into a storm in the middle of the Pacific en route to California at the start of the month resulting in the worst loss of containers since the MOL COMFORT sank seven years ago.

The battered ship changed course and made for Kobe, arriving there last week. Marine claims consultancy WK Webster, which is involved in the ONE APUS case, has warned that the total cargo insurance claims could top $200m.

Beyond the 1,816 containers that fell overboard in the storm there is an enormous volume of badly damaged boxes on deck. Images from WK Webster’s drone footage taken over the magenta-hulled ship last week have now been analysed.

Out of the 22 bays on deck, only six appear to have survived intact. With 20 rows per bay and with stack heights of six to eight tiers, this would equate to approximately 2,250 containers potentially impacted, mainly forty foot boxes, thus equating to around 4,500 teu.

A meeting is set to take place today to discuss whether or not to declare general average on the ship.

Over the weekend a number of floating containers were detected in the Pacific that had slid off the ONE APUS. The US Coast Guard has warned mariners to be careful when far out at sea from Hawaii.