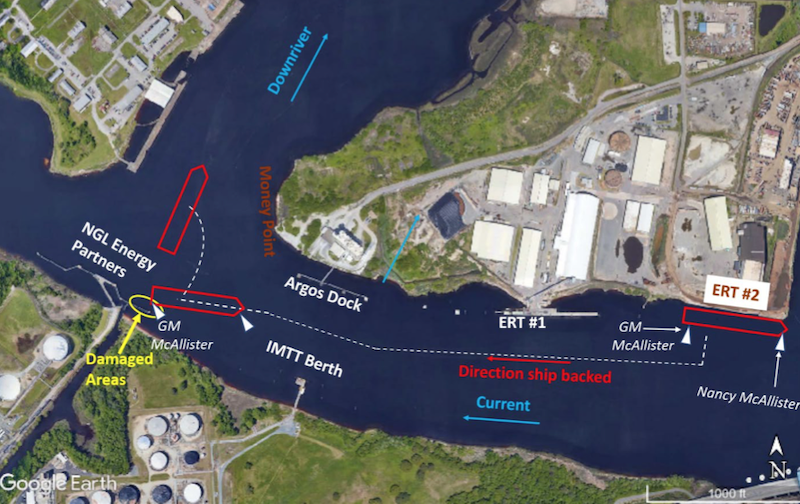 The National Transportation Safety Board has issued a Marine Accident Brief on its investigation of a Sept. 23, 2019, incident in which a wharf incurred $1.47 million in damage.

The accident occurred at about 6.57 a.m., local time, when the tugboats G.M. McAllister and Nancy McAllister were assisting the bulk carrier IJSSEL CONFIDENCE on the Southern Branch of the Elizabeth River, in Chesapeake, Va. While engaged in turning the bulk carrier, the G.M. McAllister contacted the NGL Energy Partners wharf. There were four crewmembers on board the tugboat. The vessel was not damaged and therefore continued the turning maneuver. No pollution or injuries were reported.

The Marine Accident Brief notes that the IJSSEL CONFIDENCE had engaged two pilots for the undocking and transit to sea, which was normal practice in this port. The docking pilot would undock and conn the ship from the berth to a place about 5 miles downriver, and the state pilot would conn the ship from that point until it reached the pilot boarding area off of Cape Henry, at the mouth of the Chesapeake Bay. The docking pilot was a member of the Association of Virginia Docking Pilots and had U.S. Coast Guard mariner’s credentials with a federal pilotage endorsement for the area of the river where the accident occurred. The state pilot, a member of the Virginia Pilot Association, held U.S. Coast Guard mariner’s credentials with federal endorsements and a state pilotage endorsement from the Commonwealth of Virginia for the accident area. A state pilot was compulsory for the vessel under Coast Guard regulations. 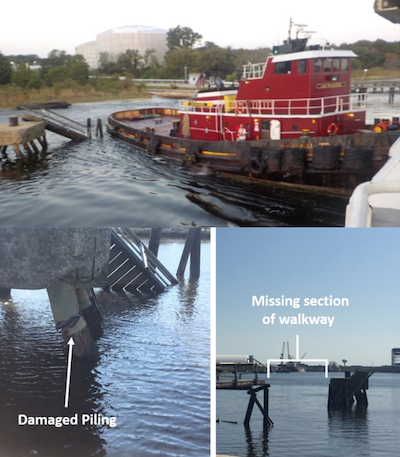 The bulker’s undocking and transit to sea was conducted with two 4,000-horsepower tugboats, the G.M. McAllister and the Nancy McAllister. After the bulker left the berth, it proceeded downriver astern in a general westerly direction toward the turning basin, with the engine dead slow astern and the rudder midship. As the IJSSEL CONFIDENCE approached the turning basin where the river started to bend northwest, the vessel’s astern speed continued to increase and its course over ground remained in a westerly direction. As the docking pilot attempted to slow the ship, the vessel moved towards to the south side of the river, away from Money Point, and the G.M. McAllister struck the NGL Energy Partners berth. During the NTSB’s investigation, both tugboat captains stated the IJSSEL CONFIDENCE was moving too fast for the tugboats to work effectively.

The docking pilot was an experienced former tugboat captain and mate. He had docked and undocked hundreds of ships in the accident area of the river, mostly using tractor tugboats. Conventional tugboats, like those involved in this accident, are less maneuverable than tractor tugboats. In this accident, says the NTSB , the docking pilot neglected to take into account the conventional tugboats’ reduced effectiveness and the additive effect to the ship’s speed.

The NTSB determined the probable cause of the contact of the G.M McAllister with the NGL Energy Partners berth was the docking pilot backing down the river toward the turning basin at a speed at which the assist tugboats could not be effectively used.