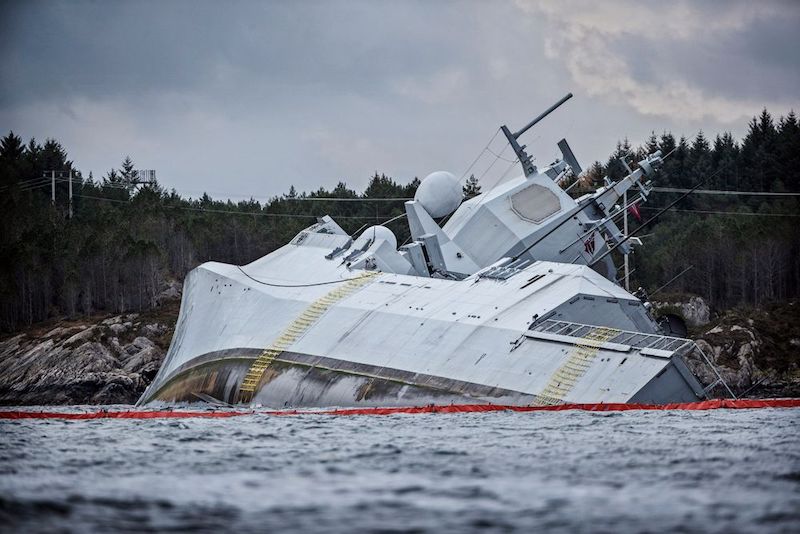 In one of the most painful peacetime losses in the history of the Norwegian Armed Forces, the frigate Helge Ingstad collided with the tanker Sola TS in November 2018 while heading back from Trident Juncture, a major series of NATO drills; it suffered a 45-metre-long gash and sunk shortly after.

The Norwegian Armed Forces have assumed that the registrar and classification society DNV GL is responsible for the collapse of the KNM Helge Ingstad in late 2018 and demands NOK 15 billion ($1.6 billion) in compensation, national broadcaster NRK reported.

Last year, the Accident Investigation Board Norway concluded, among other things, that the training of the bridge crew of the frigate was deficient. However, it also concluded that water from the generator compartment penetrated into the gear compartment through hollow propeller shafts. The Armed Forces believes that DNV GL should have revealed this in advance. The leaked water made the damage more extensive and led to the decision for the crew to prepare for evacuation.

In 2017, DNV GL (formerly known as Veritas) gave the KNM Helge Ingstad a new class certificate, valid until 2021. The approval came after a 5-year inspection carried out in 2016.

Charlotte Bjørn, Head of Communications at DNV GL Maritime Northern Europe, confirmed the lawsuit, yet brushed it aside as unfounded. She explained that the class admission is based on drafts and data received from none other than the Armed Forces themselves.

“We have thoroughly reviewed the case and believe the claim is unfounded. There is no basis for liability, nor is there a causal connection between the class admission DNV GL was responsible for and Helge Ingstad's shipwreck and subsequent loss,” Bjørn said.

Additionally, another lawsuit has been filed against the owner of the Maltese-flagged tanker Sola TS, which collided with the Ingstad, but unlike the lost frigate emerged with repairable injuries and is back in service.

In one of the most painful peacetime losses in the history of the Norwegian Armed Forces, the Helge Ingstad collided with the tanker Sola TS in November 2018 while heading back from a major NATO exercise, Trident Juncture, the worst accident of its kind in Norwegian waters in decades. While the 137-member crew only sustained light injuries, the frigate suffered a 45-metre-long gash on its starboard and went down shortly after.

DNV GL is an internationally accredited registrar and classification society headquartered in Høvik, Norway. It was created in 2013 as a result of a merger between two leading organisations in the field, Det Norske Veritas (Norway) and Germanischer Lloyd (Germany), both dating back to the 1860s. With about 14,500 employees and 350 offices operating in more than 100 countries, the company is one of the largest technical consultancies in maritime branch, transport, renewable energy and oil and gas.