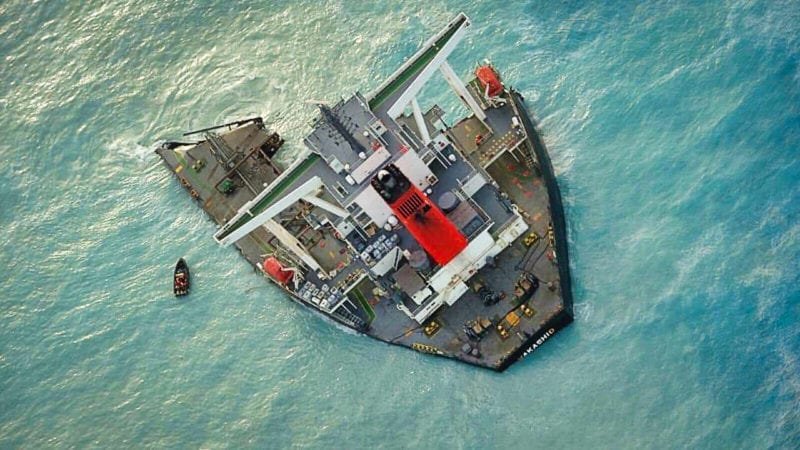 Nagashiki Shipping, the Japanese owner of the WAKASHIO newcastlemax that ran aground on coral reefs off Mauritius in July, has appointed a Chinese salvor to move the stern of the ship. Lianyungang Dali Underwater Engineering is currently transporting materials and preparing equipment in order to commence work.

The processing work is scheduled to start in late December, and the final removal is expected to be completed next spring, Nagashiki stated in an update.

The front three-quarters of the ship, which was on charter to Mitsui OSK Lines (MOL), was towed out to sea and scuttled in August.

Salvage sources in Mauritius tell Splash that the way the stern is so firmly lodged onto the reef will mean further ecological damage will be inevitable in removing it.

Of the approximately 1,000 tons of bunker oil spilled from the ship, the recovery of the oil floating on the sea has been completed, Nagashiki reported in today’s update. Work is ongoing to remove the oil that has washed ashore along about 30 km of the coast.

Nagashiki said it expects this clean-up to be completed in January next year.

“The cause of the incident is currently being investigated by the Mauritius authorities and the investigation with the Captain is continuing,” a spokesperson for the shipowner said.