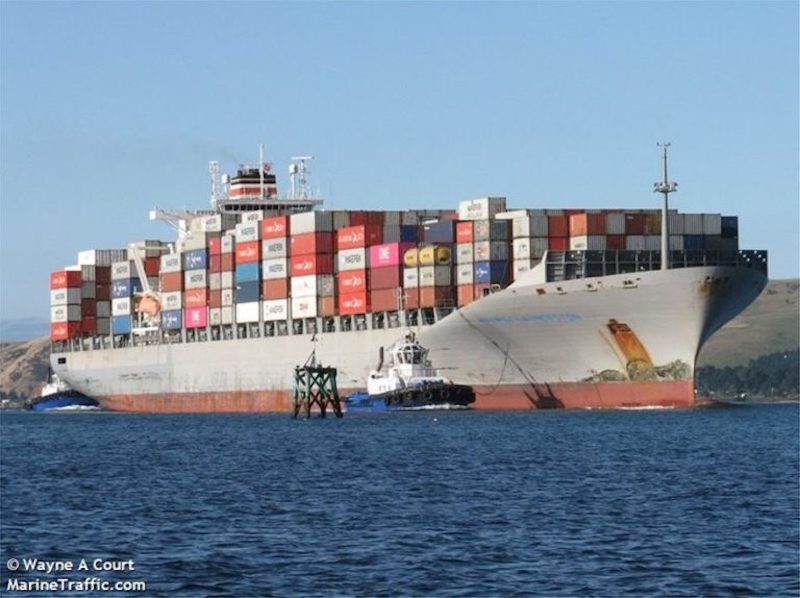 Maersk Launceston, a Madeira flagged containership, collided with the Hellenic Navy minesweeper HS Kallisto (M63) in the Saronic Gulf, off the Greek Port of Piraeus, on 27 October.

The 4,500 TEU boxship, owned by Germany’s John T. Essberger Group, was on its way from Piraeus to the Turkish port of Canakkale when it rammed into the naval vessel, cutting it into two.

Maersk Launceston suffered no obvious damages while HS Kallisto reported water ingress and tilted heavily on its starboard side, according to VesselsValue.

Two crew members of the Greek naval vessel sustained injuries and were transported to the Athens Naval Hospital, the navy said.

No injuries have been reported aboard Maersk Launceston which has a crew of 22 seafarers. Danish shipping major Maersk said that Maersk Launceston crew participated in the rescue operation that was immediately launched by local authorities.

A preliminary investigation into the cause of the accident has been launched.

The minesweeper has been towed to the Salamis Naval Base, the Hellenic Coast Guard said in a separate statement.

Greek authorities have ordered the containership to remain in the area for the time being.

“Additional interviews have been conducted with the crew members by local authorities who have officially charged the master of the containership in relation to the incident,” Essberger informed.

Reports emerged that the captain of the vessel was not only charged but also arrested, however, they have not been officially confirmed.