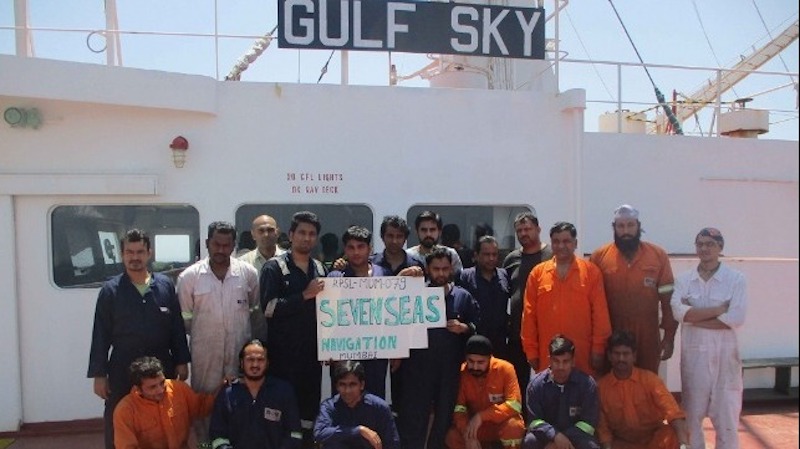 The crew of the crude oil tanker MV Gulf Sky remains unpaid for months, according to the maritime NGO Human Rights at Sea (HRAS).

The crew’s wages haven’t been paid since March 2020 totaling in excess of $197,000, while the crew’s Continuous Discharge Certificates (CDCs) are still retained by UAE authorities, pending an ongoing criminal investigation by government prosecutors, as notified to HRAS.

The seafarers are unable to return to sea and continue earning their income as they await their CDC’s to be returned while being forced to increase their indebtedness while waiting for unpaid wages.

The crude oil tanker went missing for several days after going off the radar in July following a suspected hijacking of the vessel while anchored off Port Khor Fakkan Anch, UAE.

The crew of the ship was allegedly kidnapped on the evening of July 5, 2020, by unknown persons and they were forcedly transferred to Iranian waters. The seafarers have been repatriated since the incident.

“We were arrested by Iranian hijacker from 5 July to 14 July those 10 days experience is very horrible for us because they kept us in one mesh room, we 28 people live together in that small room,” 3rd Engineer Tandel Sujeetkumar said. “But now we are facing very worst situation because our documents are seized by UAE government we didn’t get salary and now without documents, we can’t join ship now we are in a very horrible situation all authorities don’t help us.”

HRAS and the flag administration have been jointly engaged with the correspondents for the New Zealand based Maritime Mutual Insurance Association (MMIA) Ltd, though, to date, there has been no satisfactory response in terms of finalising payment of outstanding crew wages.

The Commonwealth of Dominica Maritime Administration has submitted a final demand letter to MMIA, and is considering a criminal complaint.
MMIA has responded and highlighted that the P&I Club is aware that the shipowners, Taif Mining Oman, had been placed under the US Office of Foreign Assets (OFAC) sanctions after the vessel was entered with the Club.

Crew employment contracts were originally entered into with the India-based company, Seven Seas Navigation India (Pvt) Ltd, though it remains unclear why the companies haven’t settled outstanding payments to the crew.

Further, the P&I Club has been advised that the vessel managers United Islands Maritime Ventures Private Ltd, based in India, had been involved in paying wages to the crew, though this also appears now to have ceased.

Fines in excess of $5,000,000 have been levied against the owners of the vessel and United Islands Maritime Ventures Private, respectively, by the flag administration.

The ship had been under arrest in UAE under a UAE Admiralty Law injunction since January 2020 and was anchored off Port Khor Fakkan Anch, prohibited to sail.

The crude tanker has been entangled into a legal dispute between the current and previous owners of the vessels for financial dues. The situation has resulted in challenging working conditions for the crew who were denied their salaries and even basic provisions during a global pandemic.

”The Commonwealth of Dominica Maritime Administration’s Office of Maritime Affairs and Marine Personnel has been working diligently with both the United Arab Emirates Directorate of Maritime Transport Sector and The Federal Transport Authority and the Directorate General of Shipping in India to conclude the facts as we know them,” Eric R. Dawicki, President and CEO, said.  “Once the Directorate General of Shipping in India submits its finding to the Tri-lateral Investigation Team Headed up by the Commonwealth of Dominica, we shall issue a statement of facts and a plan for legal actions against the perpetrators of one of the most brazen crimes on the high seas in the 21stCentury.”