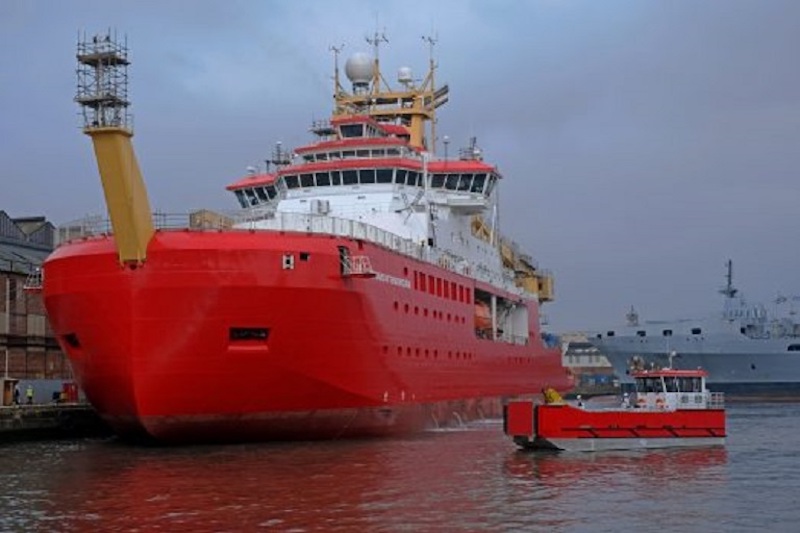 Operated by British Antarctic Survey(BAS) the new polar ship will transform UK research in the polar regions.  Its missions are critical for understanding and making sense of our changing climate.

The RRS Sir David Attenborough will sail across the Mersey to the Liverpool cruise terminal at high tide for crew familiarisation, before spending 14 days undergoing technical trials off the coast of North Wales. The shipyard engineers and BAS mariners will put the ship through its paces, performing operational checks on the propulsion, steering, engineering and navigation systems.

When technical tests are complete, the BAS ship crew will take over and spend 50 days intensive training at Holyhead Port before embarking on operational and scientific equipment trials around the Irish Sea.  The team will test anchoring, manoeuvring, dynamic positioning, and helideck landing.  Early next year the ship will undertake ice trials in the Arctic, and in November 2021 make its maiden voyage to Antarctica.

The commencement of sea trials is a major milestone in the four-year build programme, and an exceptional achievement for Cammell Laird.  From laying the keel in October 2016, to the hull launch in July 2018 and the Royal ceremonial naming in September 2019, more than 1,300 local personnel, 70 apprentices and many hundreds of specialist subcontractors and suppliers have been involved in constructing this extraordinary 15,000 tonne vessel.

David McGinley, Chief Executive Officer of Cammell Laird Shiprepairers and Shipbuilders and Atlantic and Peninsula Services says: “In conjunction with NERC and BAS, Cammell Laird has demonstrated that the UK is at the forefront of the global shipbuilding industry and we stand ready to deliver future shipbuilding projects here on the River Mersey. “This vessel is a true celebration of British expertise – from the team who built it right through to the scientific community that will call this ship home.  The RRS Sir David Attenborough is the single biggest and most ambitious build in the history of Cammell Laird and it’s an incredibly proud moment to see her embark on sea trials.”

Linton Roberts, Director of Operations at Cammell Laird says: “Although the vessel’s construction is now complete, trials are a critical and final part of the programme as they allow our engineers and the ship’s crew to put the vessel through its paces at sea. Over the next two weeks our engineers will assess and record important data about RRS Sir David Attenborough’s engineering performance to ensure every aspect of its operation is running safely and efficiently, before it embarks on further scientific equipment testing with BAS.”

Professor Sir Duncan Wingham, Executive Chair at Natural Environment Research Council, says: “The commencement of sea trials is a very important next stage for the RRS Sir David Attenborough. We now enter a crucial 12 months as we prepare this world-class polar research vessel for its maiden voyage. In reaching this point, I would like to thank Cammell Laird for their exceptional work and shipbuilding expertise. I am sure that they will continue to take great pride in having constructed the vessel throughout its long lifetime.”

Professor Dame Jane Francis, Director of British Antarctic Survey, says: “This magnificent ship will take UK scientists deep into the heart of the ice-covered polar seas. With state-of-the-art technology they will investigate the dramatic changes in the polar oceans. “This exciting moment marks a major milestone in the construction as so many people have worked tirelessly over the last four years to bring our new ship to fruition. As we seek to find answers to the current climate crisis, this ship will take us to the ends of the Earth to seek answers and to help us understand our future world.”

Science Minister, Amanda Solloway, says: “The RRS Sir David Attenborough will be critical in assisting our leading scientists to take to the polar seas and advance our understanding of the impact of climate change on the world. “As we build up towards its maiden voyage, today’s departure for sea trials is a momentous event for this remarkable ship and I will be watching eagerly as it completes the next stages of its journey towards Antarctica.”