Don’t be Backwards About Going Forwards 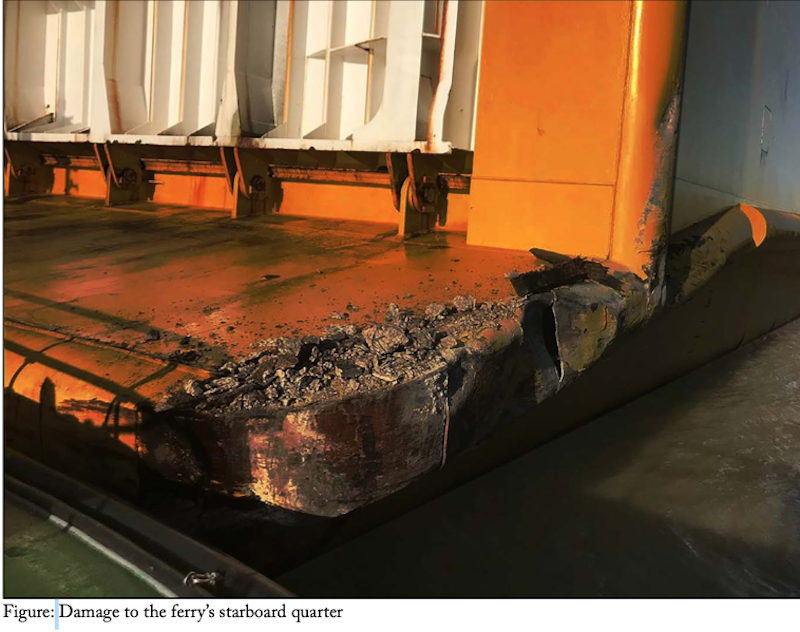 A ro-ro ferry was preparing to depart from its regular harbour. In moderate or light wind conditions the harbour authority permitted the master, who held a pilotage exemption certificate (PEC), to depart past the breakwater going astern. Above 25kts of wind, the master would have been required to turn the vessel at rest adjacent to the berth, before passing the breakwater going ahead.

Observing that the wind was 22kts, the master’s plan was to exit the harbour directly by going astern. Having unberthed the ferry, the wind started to increase, and the master struggled to maintain control. However, he pressed ahead with the plan. When approaching the breakwater, the wind was in excess of 30kts and control of the ferry was lost when both bow thrusters failed. The ferry then made heavy contact with a quay wall, resulting in damage to its starboard quarter (figure); there was also damage to the quayside.

The Lessons
1. PEC holders need to consistently demonstrate competence in harbours where pilotage exception is permitted. This can be achieved by ‘check rides’ from local pilots, or a minimum number of entry  and exits to retain currency. Although  the wind was within the agreed harbour limits for a stern first departure when the ferry unberthed, the situation soon deteriorated, and a safer course of action would have been to turn the ferry around inside the harbour.

2. Post-accident analysis showed that this master very rarely turned the vessel at  rest, having done so only twice in the 10 months prior to the accident. Records  also showed that a different master of the same ferry had turned at rest 24 times before departing in the same period. This illustrates an inconsistency of approach, which is particularly relevant when passing the breakwater going astern, was only safe in light or moderate wind conditions.

3. Passage plans should include a ‘Plan B’. In the circumstances of this accident, it would have been safer for the master to change the plan and turn the ferry off the berth before passing the breakwater. Good bridge teamwork would also have resulted in a prompt from another team member that the wind was increasing, and a pre- planned ‘tripwire’ had been crossed that necessitated a change of plan.

4. The bow thrusters had tripped due to over- heating after a period of constant heavy use as the master struggled to control  the ferry. It is not unusual for heavy electrical equipment that is not designed for continuous operation to have a time limitation when being used at high power outputs. This resulted in an unfortunate situation because, when the master needed the bow thrusters most to avoid the heavy contact, they had tripped.