ECDIS is not an Alarm Clock 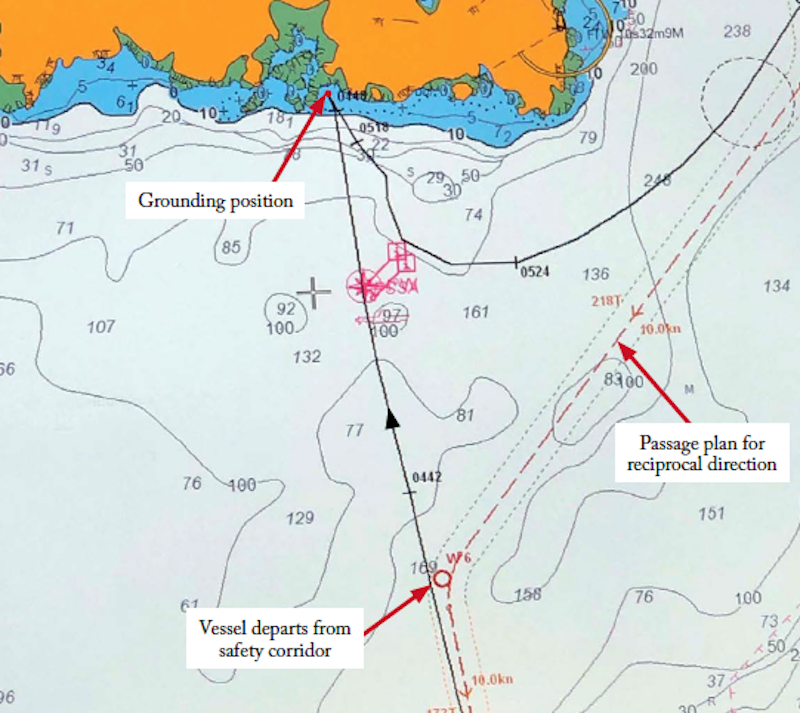 It was a fine summer night and a live fish carrier was on passage; the bridge was manned by the OOW and an AB lookout. It was still dark at 0430 when the AB left the bridge to prepare painting materials for the next watch. Thereafter, the OOW was alone and sitting in the bridge chair. The OOW did not feel tired but must have drifted off to sleep as he was suddenly woken by the ECDIS safety depth alarm indicating that the water depth was less than 10m. The OOW applied astern power and turned to port in an attempt to avoid shallow water. But it was too late, and the vessel was still underway at 4kts when it grounded (see figure).

The master was called to the bridge, and an initial assessment found no internal damage. The crew refloated the vessel using its own power around 30 minutes after the grounding and headed for harbour. Once the vessel was within mobile phone range, the coastguard was informed. An inspection by divers found some minor damage and the vessel proceeded to dry dock for repairs.

The Lessons
1. An alarm is only of value if it provides sufficient warning for the OOW to make sense of what is wrong and take action accordingly. In this case the depth alarm came too late to be effective as the seabed shelved steeply around the island and the water depth decreased rapidly. Neither the ECDIS off-track alarm, which would have alerted the OOW to the missed course alteration, nor the BNWAS, which would have alerted the crew to the inactivity on the bridge, had been set. Had either alarm sounded there might have been sufficient time to avoid the grounding.

2. There have been many incidents caused by lone watchkeepers falling asleep on the bridge. After a previous grounding incident under similar circumstances, the company involved in this case had required that a lookout be posted in the hours of darkness. When the lookout left the bridge to perform other duties while it was still dark the OOW was left alone and vulnerable to falling asleep.

3. Fatigue can creep up on you. Even if you do not feel tired it is important to recognise that falling asleep is a real risk when working at night, particularly in the pre-dawn hours where circadian rhythms mean the body is most primed for sleep.

4. Alerting the coastguard should be one of the first actions after an incident – not the last. Although the vessel was refloated without assistance, an early call to the coastguard would have been invaluable had the situation escalated. The ship was within VHF coverage and could easily have communicated with the coastguard without delay.