Discarded Cruise Ships in Turkey: A Metaphor for the Ailing Cruise Industry and It’s Former Employees 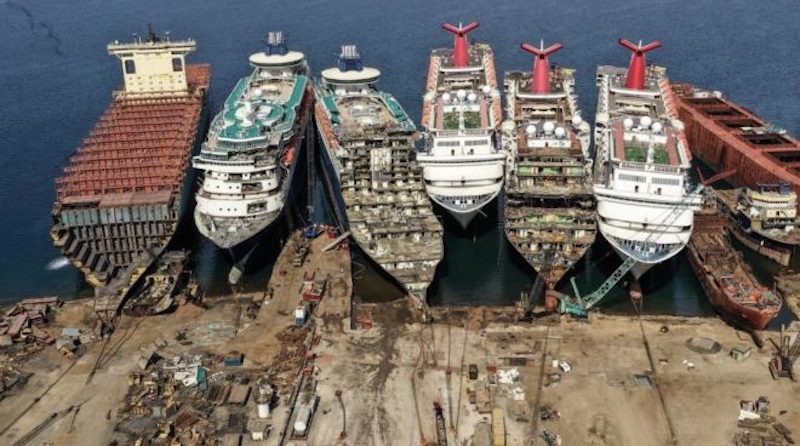 There are a series of photographs and videos circulating the internet of a Carnival cruise ship, the Carnival Fantasy, sailing its final voyage to the Aliaga ship breaking yard in the port city of Izmir, Turkey. The ship joined two Carnival ships, the Carnival Inspiration and Carnival Imagination, as well as two other ships, the Monarch of the Seas and the Sovereign of the Seas, formerly owned by Royal Caribbean and Pullmantur respectively. Ship breakers are now dismantling these cruise ships in what many call the ship “graveyard” in Turkey. 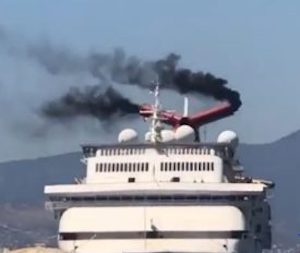 In many ways, the images are perfect metaphors for the cruise industry’s current sad state of affairs and that of its unemployed ship employees.
Carnival Fantasy shows the final moments of the Carnival ship as it billows out its last belches of  toxic smoke from its iconic Carnival funnel.  It is an appropriate reminder that this bunker-fuel-guzzling ship, as well as all of the cruise ships owned by Carnival Corporation, have been on Court-ordered probation for several years for wide-spread air and water pollution that resulted in $60,000,000 in fines. It is only fitting that this Carnival cruise ship is shown polluting until it was beached on the shore of the breaking yard and its engines were finally turned off.

The caption to the photographs taken by Reuters photographer, Umit Bektas, seem to say it all “… five hulking cruise ships are being dismantled for scrap metal sales after Covid-19 pandemic all but destroyed the industry.”

The images of discarded cruise ships are apt symbols of the fact that most cruise lines abandoned not only several dozens of their ships but many tens of thousands of their crew members and officers alike. Last month, Cruise Law News reported that Carnival Corporation fired and/or chose not to offer re-employment to literally thousands of crew members. Other publications such as Crew Center stated that Carnival laid off more than a “hundred shipboard deck and engine personnel.”

There is class-action litigation now being prepared in Italy involving senior officers who were summarily terminated, via a quick telephone call, after as many as twenty-five years at sea. This followed many unemployed crew members who were abandoned around the world after being virtually held hostage on cruise ships for as long as six months without pay.

Yet, many of these hard working crew members, who are now struggling at home with no pay or benefits of any kind, still have illusions that they will be invited back to work by companies which treated them no better than the rusting cruise ships which were left to the ship breakers in Turkey. But unlike the now forgotten ships which can be sold down to the last piece of scrap metal to maximize profits, the tens of thousands of abandoned crew members are now viewed by their former employers as having absolutely no value or purpose.