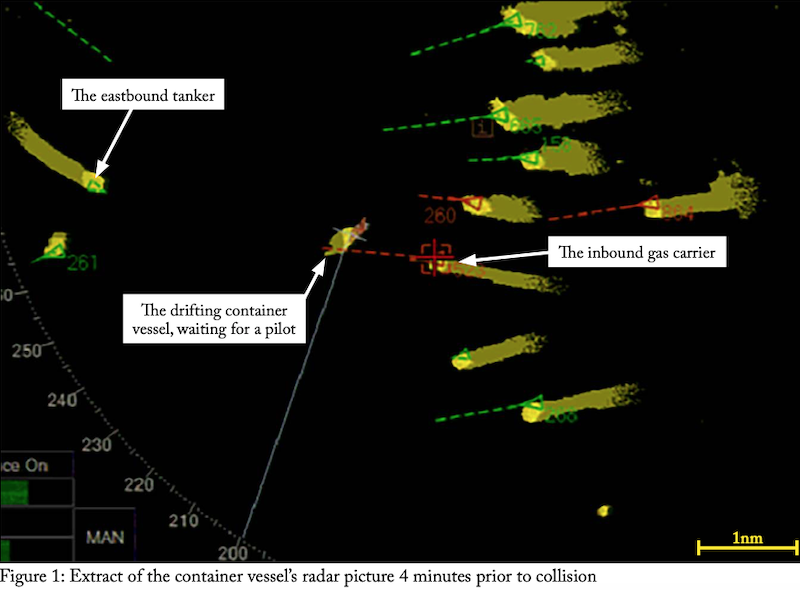 Due to severely restricted visibility in thick fog and darkness, berthing and unberthing of vessels had been suspended at a large commercial port that was located near a busy traffic separation scheme.

An inbound container vessel had been instructed by the port authority to wait outside the port until conditions improved (Figure 1). At the same time, a gas carrier was proceeding at about 13kts towards a boat transfer rendezvous position near the port’s entrance. In the same vicinity, there were eight other vessels heading west towards the traffic separation scheme (Figure 1).

On the bridge of the gas carrier, the master was conning and was aware of the container vessel ahead from radar and AIS data. As the range reduced, the master made an alteration of course to starboard to avoid the container vessel. Realising that this alteration of course had not delivered the anticipated separation, the gas carrier’s master applied full starboard rudder; however, this was insufficient to avoid collision.

Figure 2 shows the damage to the container vessel’s port quarter. 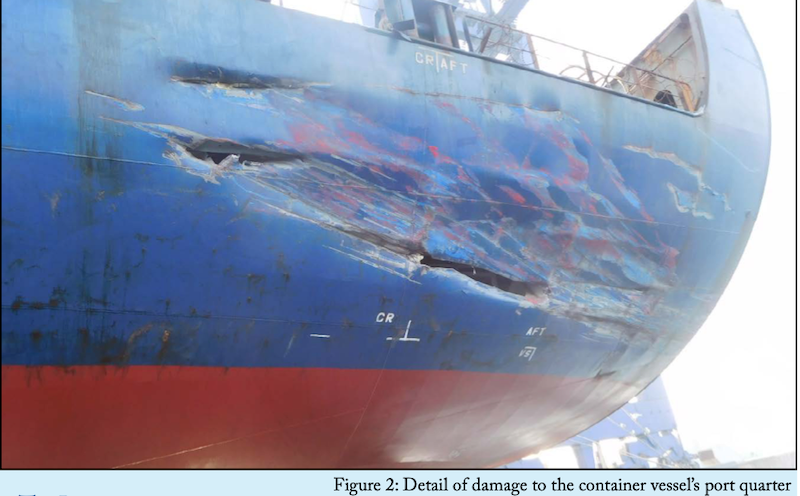 1. Collision avoidance decisions must be made using the most accurate information available. The gas carrier’s master’s understanding of the situation was primarily based on the container vessel’s AIS data, which suggested that it was ‘underway using engine’ and heading south-west. This perception resulted  in the gas carrier’s master’s decision to alter course to starboard to avoid the container vessel by passing its stern, even though it was not visible. However, the AIS data was misleading as the container vessel was actually stopped in the water with its engine off. When a close- quarters situation develops like this, the information from ARPAs will provide accurate data to inform critical decisions, based on the exact relative movement of other vessels.

2. In any condition of visibility, the Collision Regulations require that actions taken to avoid collision are made in ample time, are readily apparent to other vessels and should result in passing at a safe distance. Despite good radar pictures on both bridges, this collision was a result of neither vessel’s bridge team following these Regulations. When the shipping situation starts to deteriorate and risk of collision exists, bridge watchkeepers must take all necessary measures to ensure safe passing.

3. Reducing speed is a very effective method of allowing more time to assess a situation, especially in restricted visibility. In this case, the gas carrier was pressing ahead towards its rendezvous position at its normal passage speed of 13kts; reducing speed would have given more time to assess the situation and avoid collision, even if this meant being late for the transfer.

4. In the build-up to this collision, the gas carrier’s OOW was responding to persistent radio calls from other vessels and shore stations, including a call from an eastbound tanker (Figure 1) wanting to discuss the passing distance. All of these radio calls distracted the gas carrier’s OOW from his primary responsibility of assisting the master with collision avoidance advice.