1,300-tonne LNG tank hoisted on board the Sajir 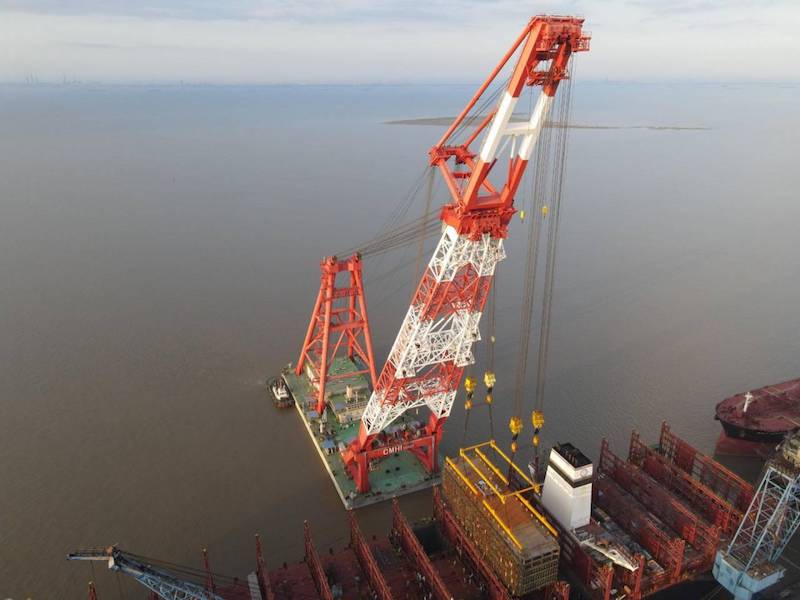 When a LNG tank weighing 1,300 tonnes was hoisted into the Sajir by a floating crane last weekend, it marked another milestone in the conversion of the 15,000 TEU Hapag-Lloyd ship. Over the previous three weeks, the ship’s hold had been prepared for the installation.

The tank will now be welded to the hold in the weeks ahead. While this is happening, the main engine and the auxiliary diesel engines will be converted to dual-fuel operation for liquefied natural gas (LNG) and low-sulphur fuel oil.

The process of retrofitting the “Sajir” for LNG propulsion began on 2 September in the HuaRun DaDong Dockyard in Shanghai. Hapag-Lloyd is accordingly the first shipping company in the world to convert a container ship of this size to LNG. Plans call for the “Sajir” to complete its conversion phase and initial test voyages in early 2021 before being redeployed in the Asia-North Europe trade lane.

The approximately USD 35 million conversion of the “Sajir” is a key element of Hapag-Lloyd’s sustainability strategy. Using LNG has the potential to reduce CO2 emissions by 15 to 30 percent and sulphur dioxide and particulate matter emissions by more than 90 percent.

“With this unique pilot project, we hope to learn for the future and to pave the way for large ships to be retrofitted to use this promising alternative fuel. However, our long-term goal continues to be CO2-neutral shipping operations using synthetic natural gas (SNG),” said Richard von Berlepsch, Managing Director Fleet at Hapag-Lloyd AG.