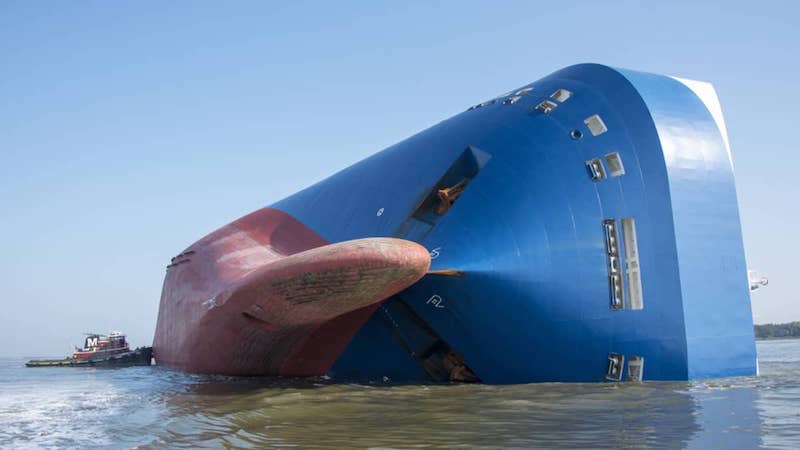 A naval architect testified Tuesday that the Golden Ray’s ballast level was not compliant with stability regulations when the vehicle carrier capsized while departing the Port of Brunswick in September 2019.

“If the vessel had kept the additional ballast on board that was discharged during the Freeport-to-Jacksonville voyage, this would have resulted in full compliance with the 2008 Intact Stability Code and likely would have prevented the capsize,” said Lt. Ian Oviatt of the U.S. Coast Guard Marine Safety Center in Washington.

The roll-on/roll-off vessel had sailed from Freeport, Texas, to Jacksonville, Florida, before continuing to the Port of Brunswick in Georgia. Oviatt said his analysis showed the Golden Ray was not compliant with the International Maritime Organization’s Intact Stability Code during either of the two earlier sailings.

“Though the righting arm curves in both of these previous voyages are slightly more favorable to stability, they are still well below the benchmark loading conditions. Our results indicated that the vessel was not in compliance with the 2008 Intact Stability Code during either of the preceding voyages,” he said.

Thus, the Golden Ray could have capsized on its way to Jacksonville or Brunswick but it didn’t because of the greater amount of ballast it carried, Oviatt determined.

“During the Freeport-to-Jacksonville voyage, the vessel discharged approximately 1,500 metric tons of ballast,” he said. “The additional righting energy that this 1,500 tons of ballast would have provided in the capsize voyage is likely to have caused the capsize.”

Oviatt explained why he believes that a lack of righting energy likely caused the capsizing of the Golden Ray. “Turning with maximum possible rudder at maximum possible speed is not typically dangerous for most cargo ships. However, in cases where there’s only a very small amount of remaining righting energy left, the dynamic effects of the turn can easily overcome the remaining righting energy and lead to significant heel or capsize. Our conclusions indicate that this was likely the case for the Golden Ray,” he said.

Oviatt testified on the final day of a hearing conducted by the Coast Guard in conjunction with the National Transportation Safety Board, Republic of the Marshall Islands maritime administrator and the Korean Maritime Safety Tribunal. The Golden Ray, which has remained on its side in St. Simons Sound since it ran aground and capsized on Sept. 8, 2019, was operated by South Korean shipping and logistics company Hyundai Glovis.

Capt. Blake Welborn, the Coast Guard’s lead investigating officer, said the hearing will determine, in part, the cause of the accident, adequacy of the ship’s safety management system, and whether there was any misconduct or negligence related to the capsizing or response.
Welborn did not say Tuesday when findings from the hearing would be announced.