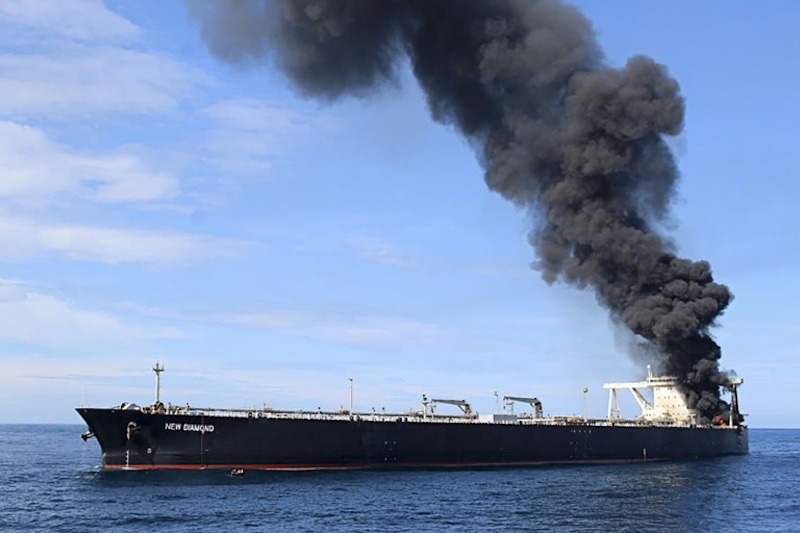 The captain of the fire-stricken very large crude carrier New Diamond is facing negligence and pollution charges in Sri Lanka.

The Panamanian-flagged supertanker is estimated to have spilled around 1,700 tonnes of heavy fuel following the engine room fire two weeks ago.

“There is sufficient evidence to prosecute the skipper under the marine pollution act as well as the penal code for criminal negligence,” a spokeswoman for Attorney General Dappula de Livera is quoted as saying by Al Jazeera.

The Indian Navy dropped dispersants to the sea area to minimize the impact of the oil slick on the marine environment.

As informed, Sri Lanka will be seeking a $1.88 million in damages from the shipowner to compensate for the damages.

The stricken ship has been towed some 95 kilometers from Sri Lanka’s coast, away from the country’s exclusive economic zone.

According to the Indian Navy, New Diamond is safe and stable. There has been no flame, smoke, or oil leakage detected.
New Diamond was underway from the Port of Mina Al Ahmadi in Kuwait to the Port of Paradip in India when the fire broke out aboard the ship on September 3.

The crude tanker caught fire after an explosion of a boiler in the ship’s main engine room. The fire was finally extinguished on September 9 after the salvage teams battled the billowing smoke in severe weather for days.

The firefighting and salvage operation are being carried out in cooperation between the  Sri Lanka Navy, Sri Lanka Coast Guard, the Indian Navy, Indian Coast Guard and SMIT salvage team, employed by the ship manager.

One crew member died in the explosion while the remaining 22 men were evacuated.

The vessel is owned by Liberian-registered Porto Emporios Shipping and managed by Greek New Shipping Limited.