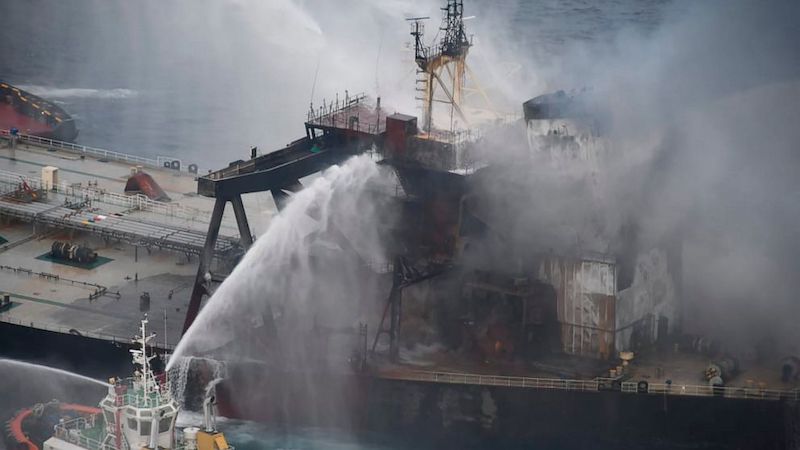 The Sri Lanka Navy has managed to extinguish the reignited fire on board MT New Diamond, and the tanker is now being towed further away towards safe waters by a tug, the navy said in an update.

The distressed oil tanker is currently about 37 nautical miles off Sangamankanda Point.

A narrow diesel oil patch extending to one kilometre away from the ship was observed last evening, according to the update.

“Over the past few days, the firefighting teams continued to surge sheer volume of seawater to extinguish fire onboard. As a result, the engine room of the ship was flooded with seawater, making it lying in a position called ‘trim by aft’. In this backdrop, it is believed that the diesel that had been stored in ruptured tanks close to the engine room had been mixed with flooded water and oozed out due to the ship’s changing position,” the navy informed. “However, the crude oil storage of the distressed ship is still safe from the fire and there is no danger of the ship leaking oil into the sea at the moment.”

A Dornier aircraft of the Indian Coast Guard was flown to the site to drop diesel dispersant to minimize the potential impact on the marine environment.

Furthermore, a marine research ship owned by the National Aquatic Resources Research and Development Agency (NARA) has arrived in the sea area and is conducting further studies regarding the case.

As informed, the ongoing disaster management efforts are challenged by rough sea conditions and strong winds.

The Commander of the Navy, Vice Admiral Nishantha Ulugetenne has dispatched a specially trained firefighting and disaster management team from the Sri Lanka Navy.

The team will board the ship and determine its status to decide on the future course of action, once the situation on the ship is completely under control.

The rescued 20 crew members (Filipino and Greek nationals) of MT New Diamond, who were isolated onboard Sri Lanka navy ship Sindurala were transferred to the port of Hambantota. They were subjected to PCR tests and will be accommodated in an isolation centre.

New Diamond was transporting 270,000 metric tonnes of crude oil from the Port of Mina Al Ahmadi in Kuwait to the Port of Paradip in India when the fire broke out aboard the ship on September 3.

The tanker caught fire after an explosion of a boiler in the ship’s main engine room.