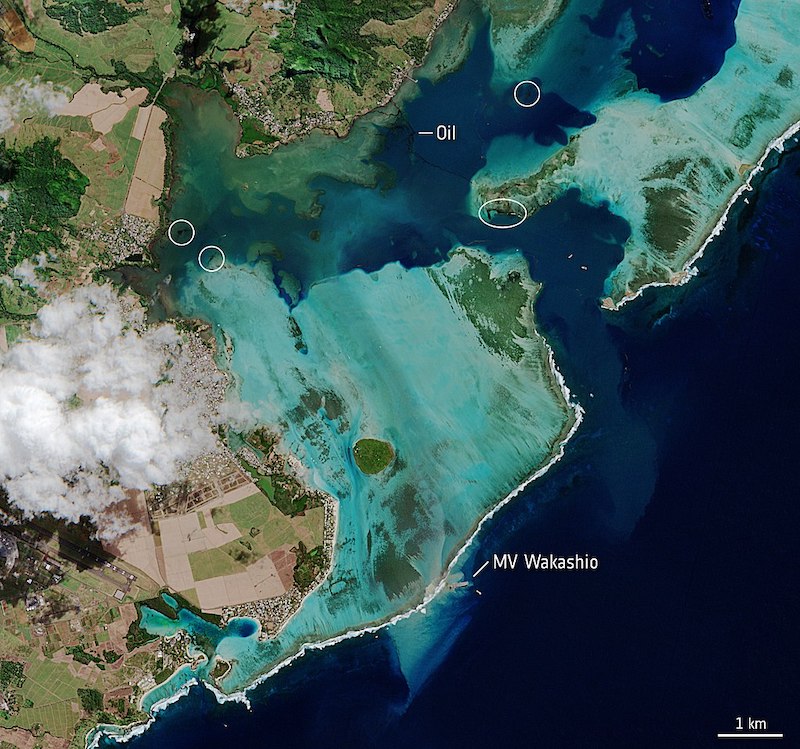 Three men have died, while one remains missing after a tug involved in the cleanup efforts of the oil spill caused by the Capesize bulker Wakashio, capsized following a collision with a barge in bad weather.

It appears that the helicopter ran out of fuel in the middle of the operation and had to go back to refuel for 2 hours before heading to the site again. Meanwhile, local fishermen rushed to the scene in the middle of the night and managed to rescue three additional men. The captain of the vessel remains unaccounted for.

The tug in question, named The Sir Gaetan, was reportedly leaving the wreck site when it rammed into the barge, used to transport parts salvaged from the site of the oil spill. The vessel sank off the northeast coast of the Indian Ocean island nation, the Associated Press reports citing Mauritius Police. It is unclear, why the two vessels were heading out to sea in such weather conditions.

To remind, the Japanese bulker Wakashio went aground off Mauritius on July 25. The bunker oil from the vessel leaked out on August 6, and the vessel broke apart on August 15.

Around 1,000 tonnes of oil are estimated to have leaked from the wreck, in what is considered the worst oil spill in the history of Mauritius.

The latest incident further fuels the anger of the people of Mauritius, who have been voicing their dissatisfaction over the handling of the grounding and environmental disaster it caused on the city streets. Tens of thousands of Mauritians are estimated to have marched in the capital over the weekend, calling for resignations of the current government due to their slow response to the grounding of the ship before it broke apart and spilled fuel.

What is more, around 35 dolphin corpses washed up on Mauritius’ beaches last week, raising concerns that the deaths of the mammals might be linked to the spill.

An investigation is underway to determine whether these are connected. According to the environmental group Greenpeace, the long term impacts of the oil spill are yet to be determined, but it is estimated that it would likely affect turtles, seabirds, and much of the marine life in the area.

“Preliminary results show that the bodies of these animals do not have traces of hydrocarbons, either in the breathing system, skin, face, or stomach. The stomach of autopsied marine mammals was empty but these animals carried serious jaw injuries. Pieces of fat and skin have been collected for further analysis, including DNA tests,” the Ministry of Blue Economy, Marine Resources, Fishing and Maritime Services said on August 28. “However, all samples taken will be subject to bacteriological and toxicological tests. Toxicological analysis will be carried out at Forensic Science Laboratory. Full results are expected in the next few days and will be made available as soon as they become available.”

Wakashio’s bow was sent to its final resting place on Sunday, August 24th, in Mauritian waters. The aft section is yet to be removed and the country has opened an international Invitation To Tender (ITT) for the removal of the aft section of the casualty.

Meanwhile, an investigation into the accident continues.

The Master and Chief Officer of the ill-fated vessel have been arrested and are facing criminal charges over the environmental disaster. Sunil Kumar Nandeshwar, the captain of the Capesize bulker, appeared in court in Mauritius capital on Tuesday, and his lawyers have asked for all charged to be dropped against him, according to the reports from French media.

The captain is facing up to 60 years of imprisonment on the grounds of unlawful “interference with the operation of a property of a ship likely to endanger its safe navigation” under articles 5(1) (b) (2) et (9) of Mauritius’s Piracy and Maritime Violence Act.

MOL, the charterer of the vessel and Nagashiki Shipping, the owner of the ship, are working on the clean-up and are dispatching teams and equipment to the site.
MOL is about to establish Mauritius Environmental and Social Contribution Team specializing in environmental restoration efforts in Mauritius. The team consists of 3 employees dedicated to this team, and 10 employees who have multi roles.

“In the short term, the new team will focus on arranging logistics of necessary equipment for oil spill recovery and removal work. On a longer term, the team will work on plans to restore the environment and contribute to the local community in Mauritius by coordinating with experts who have knowledge about the natural environment and its conservation activities,” MOL explained.

The company also wants to set up a Mauritius representative office in October this year for the purpose of cooperation and responses with relevant authorities and communities in Mauritius.