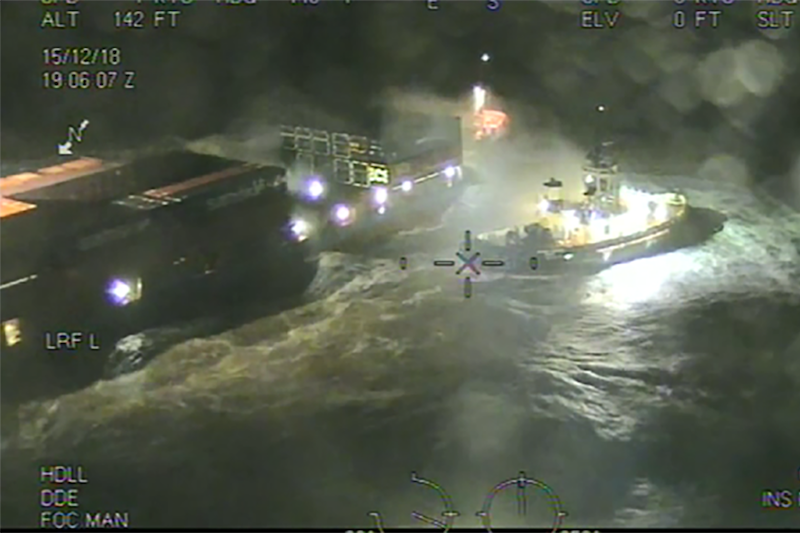 On the evening of 15 December 2018, while approaching the Humber pilot station the container feeder vessel Thea II suffered an engine failure and had to anchor to await tugs to tow it into harbour. In storm force conditions, the container vessel dragged its anchor towards the Binks Shoal. Unfortunately, both Thea II and the tug, Svitzer Josephine, ran aground before it could be towed clear.

Later that night both vessels refloated with the tide. Svitzer Josephine was able to return to harbour under its own power. After some delays while the ship managers tried to negotiate contractual terms with another tug operator, Thea II was towed clear of the bank and was eventually towed into Hull two days later. There were no injuries and no pollution.

Safety issues
• Thea II dragged its anchor because sufficient chain and/or the second anchor had not been used.
• Svitzer Josephine grounded because its master, who was focused on securing the towline to the stricken container vessel and did not have a navigational plan to keep his vessel safe, became disorientated.
• The delays in Thea II securing a tow after refloating were due to the manager’s lack of awareness of their vessel’s situation. They eventually approved a tow when the UK Secretary of States representative (SOSREP) threatened to issue direction.

Recommendations
A recommendation (2020/128) has been made to Thea II’s mangers to review the company’s emergency response organisation.