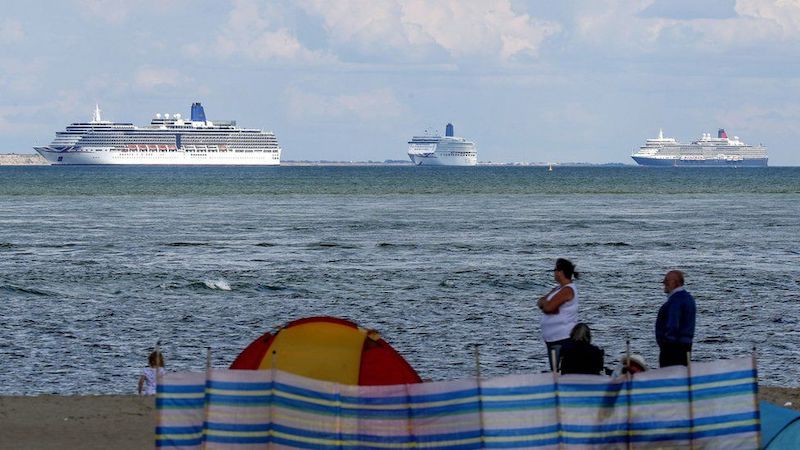 One of the more unusual sights of the coronavirus pandemic has been that of cruise ships drifting around in the English Channel, apparently abandoned at sea. But why are they there? And how did they become a holiday attraction?

Paul Derham is welcoming passengers onboard when he picks up the phone. It's business as usual for his small passenger ferry in Dorset today. But when the wind dies down he'll be back to his latest venture: sightseeing tours of cruise ships anchored off England's south coast.
"It's a two-and-a-half hour trip," he says. "We have a really good trip out of it, actually."

During the coronavirus pandemic, ships that usually spend the summer cruising the Mediterranean and Caribbean islands have instead found themselves lingering, near-empty, in the Channel.

They have been anchoring off the coast from Portsmouth to Plymouth, and at night they illuminate the horizon.

The arrival of the UK's "ghost ships", as one Twitter user called them, has transformed the view from the coast and fascinated locals and tourists alike. They have now become a tourist attraction in their own right, with people paying to see them up close.

"I knew people would be impressed," Paul says of his mini-cruises. The 62-year-old spent around three decades sailing cruise ships around the world before he boughtthe Mudeford Ferry, near Christchurch. He was even deputy captain on one of the ships he now takes his customers to see. "We whacked it on Facebook one day," he says of the idea. "We advertised two trips and we filled up within two hours."

The cruise industry was hit early in the pandemic, when the virus first swept the Diamond Princess, in Japan and then the Grand Princess, in the US. Passengers were quarantined at sea after hundreds contracted the virus onboard.

Holidays were cancelled and empty boats had to go somewhere. So why have so many ended up in the Channel?

Ships have to pay fees to berth, meaning an already crippled industry would be losing even more money if they docked in ports.

The Port of Southampton - a departure port for many UK cruises - declined to say how much it charges, citing "commercial sensitivities", but said it has "remained open during the pandemic". "Ultimately, whether cruise ships anchor off the coast or alongside in the port, it is their choice," a spokeswoman said.

But space could also be an issue. Southampton has four cruise ship terminals, and can take up to six in exceptional circumstances.

P&O said its ships remain at sea because Southampton, which is also its home port, does not have room for all of them. 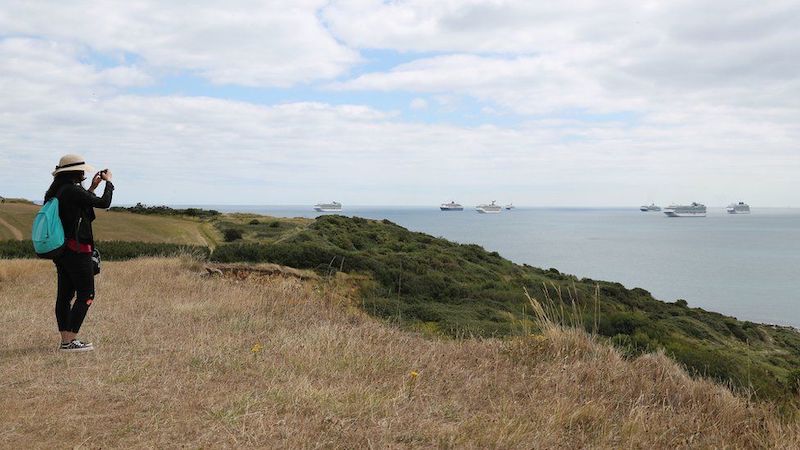 The ships do need to dock every so often to refuel and stock up on supplies for the reduced crew on board. The Cruise Lines International Association said how often they refuel depends on the ship and the type of fuel used. While they are designed to be able to run for two weeks, they "can last much longer".

There are about 100 crew currently on each of the P&O vessels off the south coast, the company said. That is likely include crew in the engine rooms, as well as cleaners, electricians, chefs and medics. To put that number into context, P&O's largest liner - the Britannia - has capacity for around 5,000 guests and crew.

Professor Richard Bucknall, director of research at University College London's department of mechanical engineering, says it "isn't possible to have any ship at anchor without a crew on board". He said that is because of dangers of "anchor drag", or ships drifting at sea, due to severe weather.
Although they are anchored, they don't switch off all of their generators. They need to keep a diesel-powered generator running in order to maintain things like safety systems and lighting for the crew on board, says Dr Tristan Smith of University College London's Energy Institute, who specialises in shipping. "The power requirements will be significantly lower than when operating at sea with passengers, both because they won't be using the power for propulsion or for the wider passenger comfort and 'hotel' services." "If they have full tanks before going to the anchorage, they will be able to run at lower power output for many weeks if not months without having to refuel."

So is it bad for the environment?
Dr Smith says it would actually make little difference to green house gas emissions if ships docked in ports rather than anchored at sea, but the impact on air pollution would likely be greater. He says the best way to reduce the environmental impact of cruise ships in ports is for them to connect to local electricity grids, or shore power, when they berth - which should allow them to shut down onboard power generators.

But shore power is not yet available at many ports, including Southampton, meaning the ships would still need to use their own generators - even in port. "Particulate matter and nitrogen oxide missions, which can impact health of local populations, would be emitted closer to where people live and work, and therefore be more likely to impact the quality of the air they are breathing," he explains.

Back in Christchurch, Paul is looking forward to his next outing. The captain of one of the cruise ships parked off the Dorset coast has even started to wave back at his tours using what he describes as a six-foot-long hand made of plywood. And his tours remain popular. "On all the trips we've done, we have a round of applause when we arrive at Mudeford Quay."