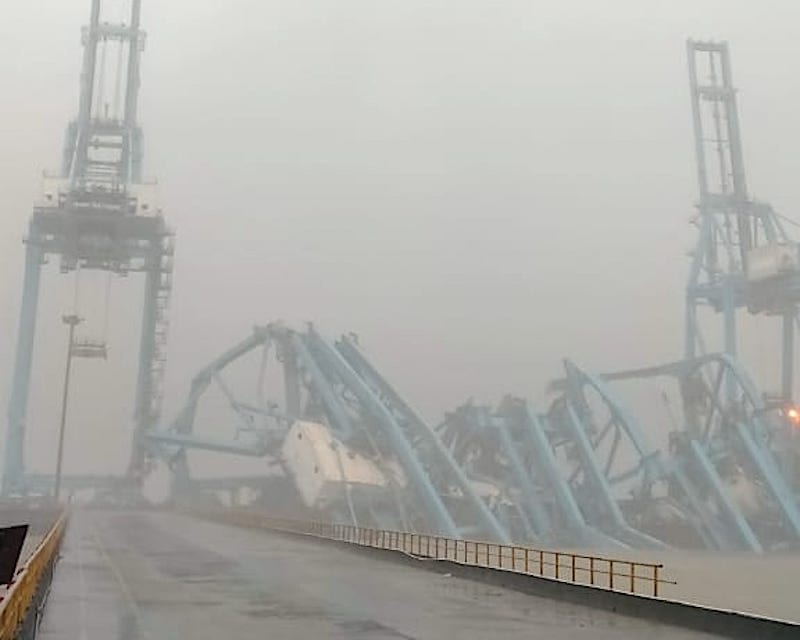 There were no casualties. No ships were at berth when the cranes crashed, port officials said.

The terminal is one of the five operating at JNPT, India’s biggest state-run container port. The other four terminals are run by private entities.

The JNPT-run terminal known as JNPCT has eight rail-mounted quay cranes or so-called ship to shore cranes along its 680-metre berth length.

Shipping industry sources said that the terminal would be partially affected by the cranes collapse. JNPCT can continue container loading and unloading operations from one berth till the three cranes are re-mounted, he said.

“Owing to inclement weather and above normal gusts of wind, there has been damage to three cranes at JNPCT. However, there were no injuries, and everyone is safe. The exact damage is being ascertained,” JNPT Deputy Chairman Unmesh Wagh told BusinessLine. Wagh, however, said that the terminal would not be affected by the damage to the three cranes. “We have five more cranes, and they can manage operations as usual. Small adjustments will have to be made, but we are not stopping operations,” Wagh added.

Shipping industry sources said that the cranes have fallen in the middle of the berth. A ship that docks will have to berth parallel not longitudinally. “So how will the cranes at the two ends of the berth lift the containers in the middle when a ship docks,” he asked.