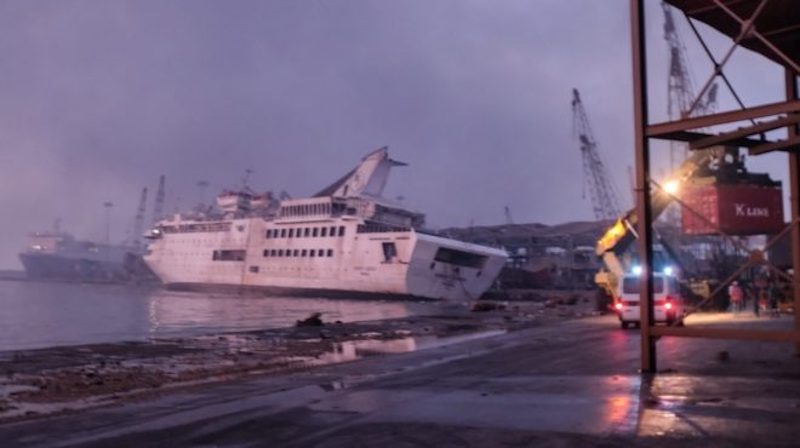 A massive fiery  explosision near a waterfront, industrial section of Beirut, Lebanon killed over 70 people and wounded around 4,000 earlier today.  A video (below) of the blast, which was broadcast around the world, showed a large fire with smaller explosions followed by a horrific explosion which reportedly destroyed buildings far from the blast site.

The huge blast significantly damaged the Orient Queen cruise ship, which was located near the explosion at the port of Beirut. Photographs taken by a correspondent of Al Jazerra of the damage to the port include the cruise ship listing significantly at her berth at the port.

The Bahamian-flagged cruise ship is owned and operated by locally-owned Abou Merhi Cruises.

Local officials blamed the explosion on the storage of ammonium nitrate, which are highly explosive materials, which was stored in a warehouse in the port for the past many years. There is also speculation that the explosion was intentionally set.

FR24 News reported that several people aboard the ship moored near the site of the explosion were injured and taken to hospital.

“The ship is totally destroyed – the cabins, the saloon, everything,” said Vincenco Orlandini, a 69-year-old crew member.

Al Jazeera reported that “at the port, a man in the all-white uniform of a boat crew, stained with blood,” wandered near the Orient Queen whose “interior was blown out, it was sloped sideways onto the quayside.”