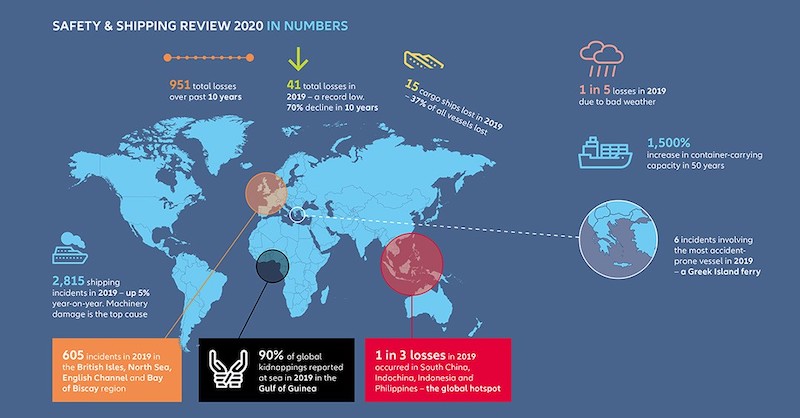 A total of 41 large ships were lost worldwide in 2019, which is almost 70% down over a decade. However, the Review points to an increase in the number of shipping incidents – 2,815 – and in the incidence of claims from machinery issues.

The annual AGCS study also identifies a number of challenges facing the shipping industry as a result of the coronavirus crisis which could impact safety and risk management. These include reduced or delayed statutory surveys and port inspections which could lead to unsafe practices or defective equipment being undetected, and a growing number of cruise ships and oil tankers in lay-up around the world which pose significant financial exposures, due to the potential threat from extreme weather, piracy or political risks.

According to the report, the South China, Indochina, Indonesia and Philippines maritime region remains the top loss location with 12 vessels in 2019 and 228 vessels over the past decade – one in four of all losses.

High levels of trade, busy shipping lanes, older fleets, typhoon exposure, and safety issues on some domestic ferry routes are contributing factors, according to the Review. However, in 2019, losses declined for the second successive year. The Gulf of Mexico (4) and the West African Coast (3) ranked second and third.

Allianz also highlights a year-on-year increase in total losses involving Ro-Ros, a trend which is said to be continuing throughout 2020.

‘The rise in number and severity of claims on Ro-Ro vessels is concerning. Ro-ros can be more exposed to fire and stability issues than other vessels,’ said Captain Rahul Khanna, Global Head of Marine Risk Consulting at AGCS. Many have quick turnarounds in port and a number of accident investigations have revealed that pre-sail away stability checks were either not carried out as required, or were based on inaccurate cargo information. Too many times commercial considerations have endangered vessels and crews and it is vital that this is addressed on shore and on board.’

There were almost 200 reported fires on vessels over the past year, up 13%, with five total losses in 2019 alone, and mis-declared cargo is said to be a major cause of such events.

AGCS also notes that shipowners are becoming increasingly concerned about the prospect of cyber-conflicts. There has been a growing number of GPS spoofing attacks on ships, particularly in the Middle East and China, while there have been reports of a 400% increase in attempted cyber-attacks on the maritime sector since the coronavirus outbreak.

The AGCS report also addresses shipping’s move to halve its CO2 emissions by 2050, and it notes that: ‘Compliance [with emissions targets] is not straightforward and teething problems could lead to a surge in machinery damage claims.

‘Ultimately, de-carbonisation will also have regulatory, operational and reputational implications. Progress on addressing climate change could stall with the focus on the coronavirus pandemic. This must not be allowed to happen.’

The report also suggests that the increased use of industrial control systems to monitor and maintain engines could significantly reduce machinery damage and breakdown incidents, one of the biggest causes of claims.

The Review also identifies the ‘unluckiest ships’ in 2019: two Greek Island ferries and a bulk carrier in North America were the most accident-prone vessels, each being involved in six different incidents.