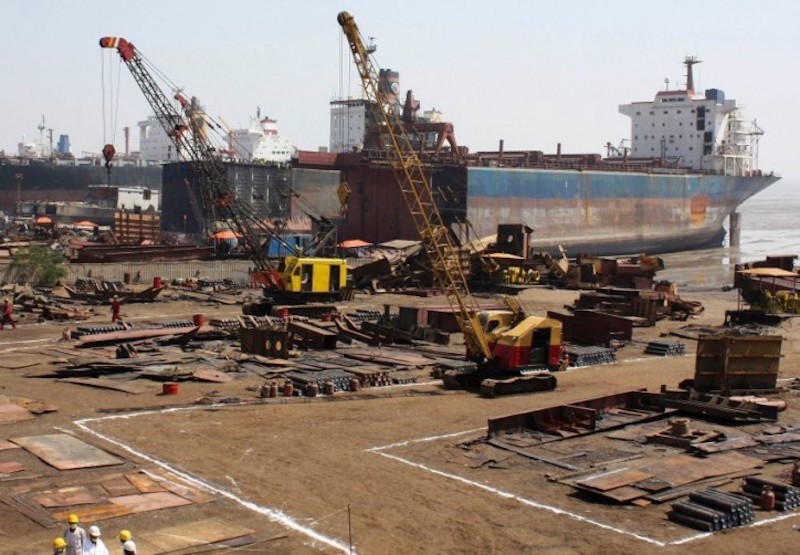 Ruling may persuade shipping companies that scrapping vessels in the dangerous, unregulated yards of south Asia is a false economy

A widow whose husband fell eight storeys to his death while breaking up a supertanker in Bangladesh can pursue a negligence claim against Maran (UK), a British company involved in the ship’s sale, according to a high court ruling.

The judge in London ruled shipping firm Maran (UK) Ltd arguably had a duty of care towards Mohammed Kalil Mollah, 32, who died working on the Ekta, a 300,000-tonne vessel, that was being scrapped at a yard in Chittagong, now Chattogram, Bangladesh. The Guardian wrote about Mollah’s death earlier this year.

Maran (UK), part of the Greek Angelicoussis shipping group, one of the largest private fleets in the world, is not the Ekta’s owner or Mollah’s employer but was said to be the company responsible for the tanker being in Bangladesh, where working conditions are notoriously dangerous. Hundreds of people, mostly without contracts, die or are injured every year in falls, explosions and accidents.

In his judgment, Mr Justice Jay refused to strike out a claim for negligence brought by Hamida Begum, Mollah’s widow, against Maran, who sold the Ekta to another company for breaking. He agreed with Begum’s solicitors, Leigh Day, who argued that Maran had influence over where the ship was scrapped and could have ensured it was recycled in an ethical manner, but would have to accept a lower price for it.
If successful in a future trial, Begum could be awarded up to £100,000 in damages.

Oliver Holland, a partner at Leigh Day, said the ruling was a “great relief” to Begum. “The judgment handed down today is a great relief to our client, who has suffered not only the loss of her husband, but of her security and livelihood.

“If Maran (UK) Ltd is made to accept that it owed Mr Mohammed Kalil Mollah a duty of care, maybe that will go some way to making UK shipping companies think twice about accepting greater financial reward for their end-of-life vessels at the cost of the environment and the lives of south Asian workers. “This has wider significance because it is saying that any UK shipping company, if they send their vessels to Bangladesh or India or Pakistan to be broken up, there’s a potential liability towards ship-breaking workers who are injured or die while breaking up their vessel.

“These vessels are toxic, full of asbestos and radioactive material and there are no or very little health or safety measures for workers. The vessels are beached, there are no cranes, the workers effectively have to take them apart by hand. “The companies are set up by creating post-box companies, sometimes in the Caribbean, that own these vessels and when they sell them to Bangladesh they don’t sell them directly but sell them to cash buyers who hold them for a few weeks and then send them to south Asia.”

The judge said: “The proximate cause of the accident was the deceased’s fall from a height, but on a broader, purposive approach the accident resulted from a chain of events which led to the vessel being grounded at Chattogram.”

He accepted that over the past decade more than 70% of vessels at the end of their operating lives are broken up using the “beaching” method. He said: “[The Defendant argued that] given that nearly all vessels ended up in south Asia, it could not be said that [Maran UK Ltd] were deviating from standard practice. I reject that submission on the straightforward basis that if standard practice was inherently dangerous, it cannot be condoned as sound and rational even though almost everybody does the same.”