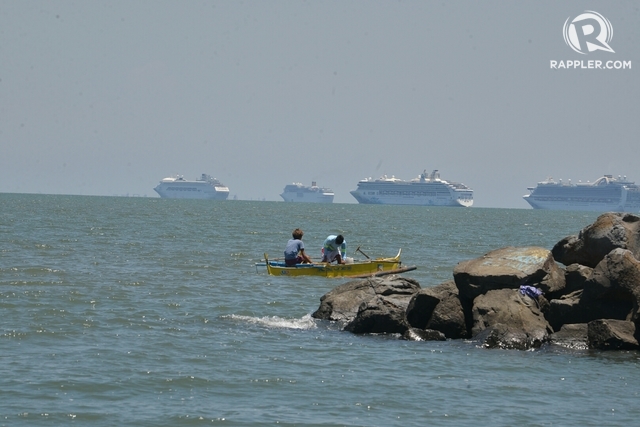 International cruise line operators have included the Philippines in their Southeast Asian itineraries but this time, not to bring tourists but to send home Filipino crews brought on by the coronavirus disease 2019 (Covid-19) pandemic. The Philippine Coast Guard (PCG) said 13 cruise ships were at the Manila Bay anchorage area as of May 4 and eight more ships are expected to arrive, carrying thousands of Filipino seafarers. PCG Commandant Admiral Joel Garcia said there were 4,179 Filipino seafarers onboard cruise ships at the Manila Bay anchorage area at the PCG National Headquarters. A PCG medical team has administered rapid antibody testing for coronavirus disease 2019 (Covid-19) to 2,780 Filipino seafarers aboard cruise ships. There were 532 seafarers onboard the QUEEN ELIZABETH ship; 229 in SUN PRINCESS; 298 in SAPPHIRE PRINCESS; 467 in VOYAGER OF THE SEAS; 284 in SEA PRINCESS; 314 in PACIFI EXPLORER ; 215 in PACIFIC DAWN; and 441 in MAJESTIC PRINCESS.

The rapid testing is a precautionary measure before their disembarkation in Manila. PCG Acting Deputy Chief for Civil Relations Service Commodore Armando A. Balilo said they have ensured the safety and security of cruise ships at the Manila Bay anchorage area, while waiting for the go-signal to disembark hundreds of Filipino seafarers. “The seafarers of cruise ships underwent swab tests. There were more cruise ships coming and some wanted to dock in Subic port. There were new protocols on disembarkation of seafarers,” Balilo said. The result of the test can be seen after two days. If they will be tested positive for Covid-19, they will be brought to the Research Institute for Tropical Medicine or another hospital. The Filipino seafarers manning cruise ships, who were issued with a clean bill of health by the Bureau of Quarantine, would be allowed to forego the 14-day mandatory facility-based quarantine. PCG would assist them in returning to their respective home provinces. “It so fulfilling,” said one PCG medical technologist, after they finished the rapid antibody testing for Covid-19 for 532 Filipino seafarers of Queen Elizabeth that took them four hours to complete.When the medical personnel disembarked to go back to the PCG headquarters, Filipino seafarers shouted to express gratitude and appreciation to the services rendered by the health workers. The medical service of the PCG also thanked them for the support and trust bestowed on them.

“We only wished for your continuous support to ensure safety of all against the threats of coronavirus 2019. Again, thank you very much,” a PCG medical personnel said. Earlier, a total of 438 Filipino crew members of Grand Princess Cruise ship arrived in Clark Airbase in Pampanga. All the repatriates were brought to the Athletes’ Village in New Clark City and underwent 14-day quarantine Ship tied to Australia virus deaths sails into Manila Bay A cruise ship being investigated in Australia for sparking coronavirus infections has dropped anchor in Manila Bay to bring Filipino crewmen home

A cruise ship being investigated in Australia for sparking coronavirus infections anchored in Manila Bay on Thursday to bring Filipino crew members home. The RUBY PRINCESS joins at least 16 other cruise ships at anchor waiting for their more than 5,000 Filipino crew members to be tested for the coronavirus before disembarking. Coast guard spokesman Armand Balilo said 214 Filipino crew members on the RUBY PRINCESS will be tested but may have to wait behind those from other ships. The RUBY PRINCESS has been linked to 19 deaths in Australia and two in the United States. The Australian investigation is trying to determine why 2,700 passengers and crew were allowed to disembark in Sydney on March 19 before the test results of sick passengers were known. Many passengers flew from Sydney overseas. Two died at home in the United States, including Los Angeles resident Chung Chen, whose family is suing Princess Cruises for more than $1 million in a lawsuit alleging it failed to alert passengers to the risk. An initial batch of 300 Filipino crew left the ship last month and were taken to Sydney to catch a charter flight to Manila. The cruise ships have been asked to wait in a Manila Bay anchorage area instead of docking in nearby ports as part of strict precautions against the virus. Medical and coast guard teams in protective suits travel by motorboats and carry out tests on board each anchored ship in a laborious effort before the Filipino crewmen can disembark for treatment in a hospital or to stay in further quarantine depending on the test results. “The protocols are strict. Our teams get onboard, undertake swab tests then the crewmen wait for three days,” Balilo said by telephone. “If they test positive, we bring them to a hospital but if they’re OK, we release but they should still go into some days of isolation.” More than 24,000 Filipino workers, including nearly 17,000 ship crew and personnel, have returned by air and sea after being displaced by the coronavirus pandemic and lockdowns worldwide. They have overwhelmed quarantine facilities in metropolitan Manila.

Philippine officials have stopped incoming international flights for a week starting May 3 in an effort to decongest the quarantine facilities in metropolitan Manila and prepare for the arrival of tens of thousands more returning Filipino workers in the coming weeks. The Philippines is a major source of global labor and the huge income remitted by millions of workers have kept Manila’s economy afloat for decades and served as a lifeline for impoverished families.Nearly 2,000 Filipinos have been infected by the coronavirus in 46 foreign countries and 215 have died, many of them workers, according to the Department of Foreign Affairs in Manila. A large number of Filipinos has faced layoffs due to business closures abroad and the government has struggled to bring many of them home.