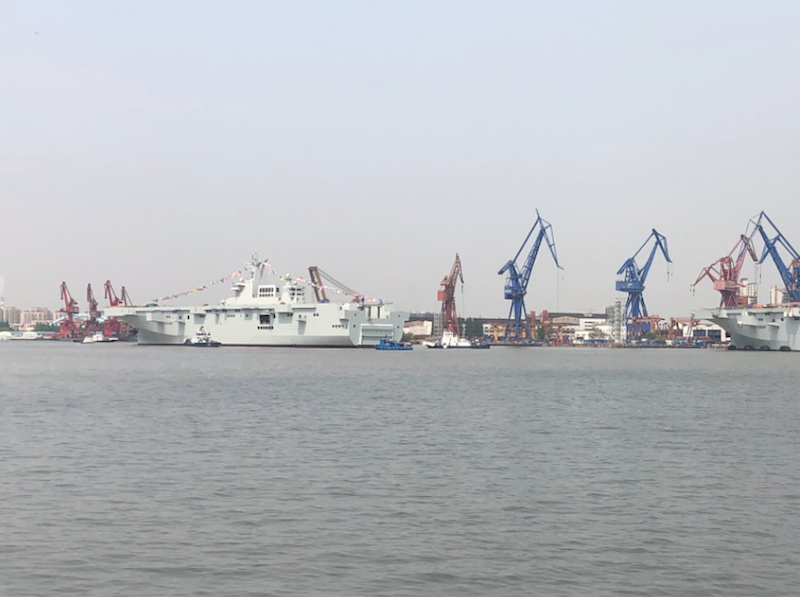 Pictures shared by local ship spotters on Sina Weibo (a Chinese social media platform) this morning show the construction dock where the second Type 075 was assembled being flooded. Other pictures show the vessel being towed by tug boats next to the first amphibious vessel. This is where the shipyard will continue outfitting work over the next few months.

According to local media, 23 March will mark the 71st anniversary of the founding of the PLAN.

The first-in-class amphibious vessel, which was launched 6 months ago, and is currently at fitting out stage at the shipyard caught on fire one week ago as we reported here. According to local media, both Type 075 ships’ production schedules have already been affected by the nation-wide factory shutdown following the COVID-19 epidemic. While the fire damage looks superficial on the outside, there is no way to tell what kind of damage was done inside the LHD and if the incident will affect the expected start of sea trials.

The Chinese Navy officially started development work on the Type 075 in 2011. The project called for a helicopter carrier displacing more than 30,000 tonnes. Its aim is likely to increase the “vertical” amphibious assault capability with the very mountainous East Coast of Taiwan in mind.

While the Type 075 appears to slightly smaller than the U.S. Navy’s LHA, it is larger compared to French or Spanish/Australian LHD equivalents. It is actually pretty close in size to Italy’s future Trieste LHD.

The first Type 075 was constructed in record time (this has become the norm nowadays, for Chinese shipbuilding: extremely fast construction pace that no one can match). A second vessel of the class is about to be launched while a larger version is rumored to be planned.

When fully operational, the new Type 075 LHD will bolster the PLAN’s amphibious capabilities, which today rely on the Type 071 LPD design.