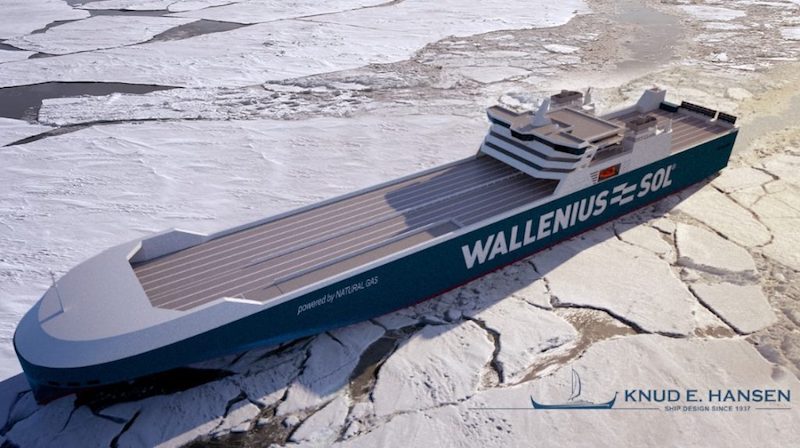 Construction of WALLENIUS SOL’s new RoRo ship has now officially begun. It will have the highest ice class, be LNG fuelled and enter operation in the autumn of 2021.

ON MONDAY, MARCH 30, it was time for steel cutting at the CIMC Raffles shipyard in Yantai, located in Shandong province in eastern China. Attending the ceremony, which marks the start of construction, were representatives for WALLENIUS SOL and Wallenius Marine. The vessel, which will be the world’s first RoRo ship to be both LNG fuelled and have ice class 1A Super, will be delivered in August 2021.

“I’m absolutely thrilled that construction has begun. We set the bar high in terms of reliable ocean freight with low environmental impact, and a ship with both the highest ice class and environmental performance shows how we live up to this. As a state-of-the-art vessel, it’s very important for us,” says Ragnar Johansson.

The ship will be 242 metres long (LOA) with a beam of 35.2 metres and a capacity of 5,800 lane metres. It will have a top speed of 20 knots and a cruise speed of 16 knots. It was designed by Wallenius Marine in collaboration with Danish shipbuilder Knud E. Hansen to handle the tough, sometimes Arctic, conditions in the Gulf of Bothnia. Wallenius Marine visited a number of shipyards worldwide before it commissioned CIMC Raffles.

“They are renowned for their work with offshore structures. CIMC Raffles is at the very forefront of engineering know-how, so we feel extremely confident about the build,” says Per Westerdal, project manager at Wallenius Marine.

In mid-March, Wallenius Marine opened a local office at the Yantai shipyard. It will be fully manned by June and will allow them to monitor the process closely and collaborate with CIMC Raffles. In June, construction will begin on a sister ship to the one now beginning to take shape.