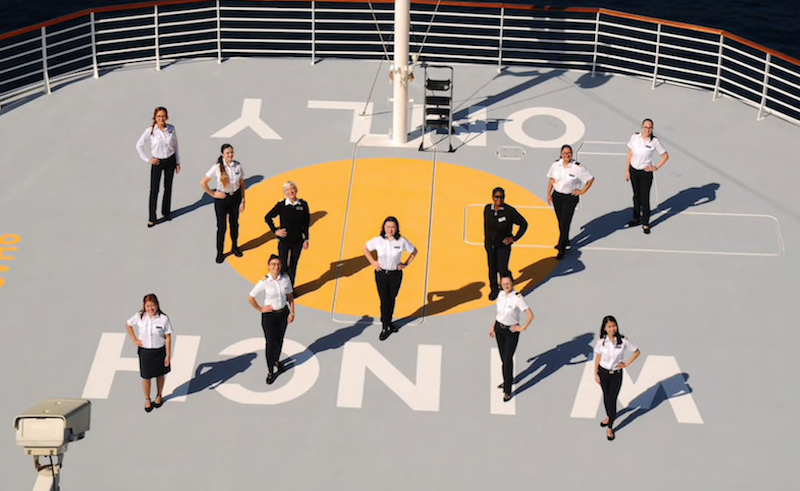 For centuries, the only female you’d find on most ships was wooden and nailed to the prow. Women on board were said to bring bad luck, and while this sailing superstition is mostly a thing of the past, the maritime industry is still predominantly male – only 2% of the world’s mariners are female.

Things are rather different at Celebrity Cruises, where 22% of the bridge teams are women. The cruise line will celebrate International Women’s Day with an industry first – Celebrity Edge will set sail from Fort Lauderdale on a seven-night Eastern Caribbean voyage with an all-female bridge and officer team. Captain Kate McCue – the first American cruise ship captain – will be at the helm and 26 other women, from 17 different countries, will make up the rest of the senior crew. We speak to two of the women on the bridge, and their female boss who helped make it happen.

Cptain Kate McCue
“I start each voyage with an announcement that ‘we’ll get going as soon as I find which purse the keys are in,’ and because I make the joke first it beats everyone to the punch line. 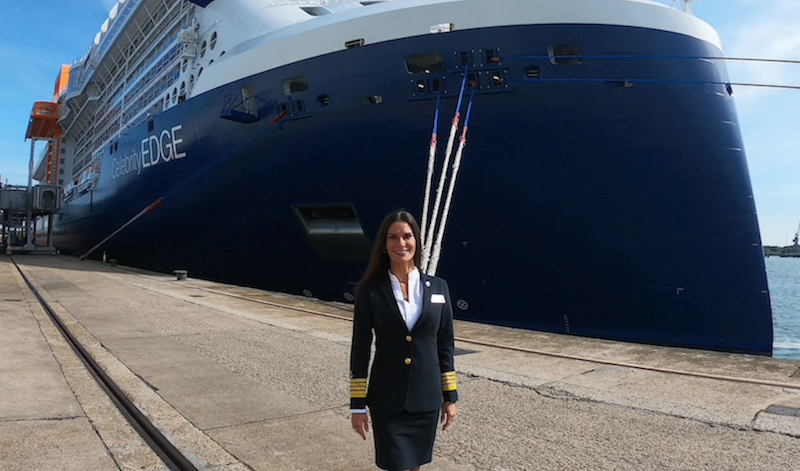 "My entire career has been on internationally flagged ships with crews from up to 72 different nationalities. When you’re surrounded by such diversity, you quickly realize that everyone is a minority of some sort, whether it be race, religion, culture, sexual orientation, or gender. My being female was never an issue on board, but when I was promoted to Captain, the external spotlight, especially from our guests, was a bit overwhelming because they’re not necessarily used to this inclusive environment.

"When I was 12 when my parents took us on a voyage to the Bahamas. I said to my dad, ‘I want to be a cruise director when I grow up.’ He replied, ‘You can do anything you want in the world, including drive the thing.’

"After I graduated from the California Maritime Academy I applied to every cruise line in the industry. For about a year and a half I didn’t hear anything, so I changed my CV and applied to be a bartender on a ship. The line said I was not qualified as I had never served a drink in my life, but I was qualified to drive their ship, so I joined as a third mate [officer]. I spent 13 years working my way up and in 2015 I got the call asking if I would like to come to Celebrity Cruises as their first female captain.

"Being a captain is the highest title I can hold, however, to be able to take a ship from the time its keel is laid until the ship is brought into service is like having a child. That is my next goal.” 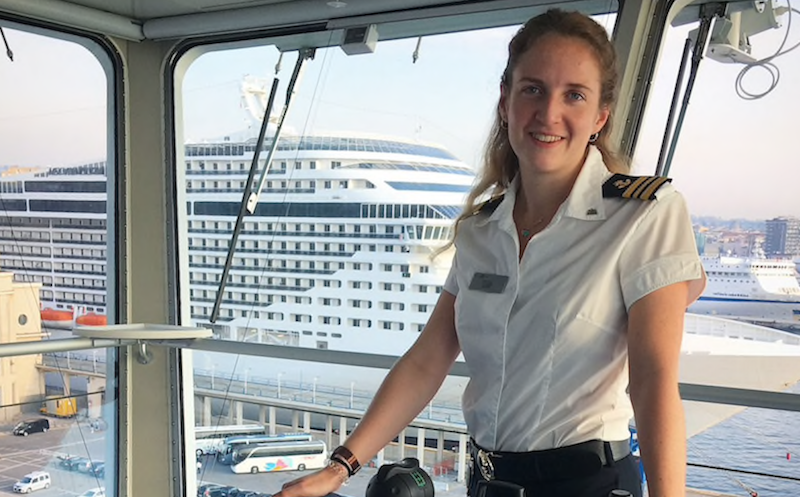 "I love the feeling of being in charge of a huge vessel with all of these people on it. I get the same thrill every time I take over navigation and say; ‘yes, I have command.’ I’m first officer on Celebrity Apex, and I’m in charge of navigating the ship for eight hours a day, with 4,000 people on board. It is a heavy responsibility, and not something I take lightly. But I know what I’m doing.

"After starting my career in the offshore industry, I joined Celebrity Cruises at 21 years old as third officer and was soon promoted to second officer, moving through the ranks quickly to be first officer last summer at 24, which is considered young for that role. At Celebrity I have developed strong bonds with female junior officers – something I didn’t have in their position. While I had a wonderful mentor who never treated me any differently because I was female, I didn’t have a senior woman to mentor me until I had the honour of working with Captain Kate McCue.

"Cruise ship life is very high pressure, but so far I feel I haven’t had to make any sacrifices for the sake of my career. My family are so supportive and love coming on cruises with me. I met my fiancé on board Celebrity Solstice. Having someone who understands being a seafarer and working on board ship is so valuable. If you don’t speak for two days because you’re so busy, they understand. Tensions that might build with someone outside this world aren’t there. My partner is a second officer and I’m a first officer. There is often an assumption that he’s a higher rank. When I get to explain that no, I am, it’s quite fun.”

President and Chief Executive Lisa Lutoff-Perlo
“On March 8, we’re setting sail for the first time in maritime industry history with an entirely all-female bridge and leadership team. It’s not a PR stunt. We have spent five years making this happen. The gender gap is so big in our industry – only 2% of the mariners in the world are women. At Celebrity almost 25% of mariners are women. This is meaningful progress and no one else even comes close.

"There is no role – on ship or shore – that I would not give to a woman. We have hired five women engineers over the past six months. Those jobs are not glamorous and the engine room is a difficult environment to work in, but women are significantly underrepresented and it’s important that we have more gender balance there as well.

"I want the day to come when women will not feel alone and uncomfortable in the room. I remember that feeling in many of my roles and I want to change that for other women. And I have the opportunity to do that in my position.

"I asked for the CEO position three times before I finally got a yes. But I believed in myself and I believed I could prove to our Chairman I deserved the position, and I didn’t give up.

"I had a wonderful advocate and sponsor, a male executive in the company who really believed in me, guided me and moved me into many progressive positions that did not seem logical for me at the time. All my years in sales taught me to overcome objections and close the deal – that helped me not let initial rejection deter me from my goal. I learned early in my career how to turn a ‘no’ into a ‘yes’ and did it this time as well.

Nothing worth getting is easy. But it’s worth the climb.”